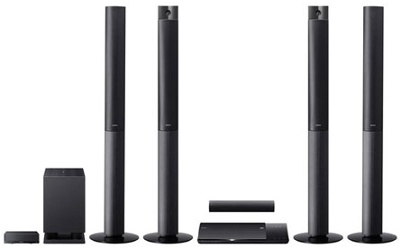 The latest 5.1ch 3D Blu-ray Home Theater System doubles up as a server to deliver music to the entire home via its built-in Wi-Fi, providing convenient volume control of network speakers via the GUI, eliminating the need to manually adjust the speakers located in different rooms.

Some of the key features include:

The BDV-N990W is now available at all Sony stores and authorized outlets and is priced at S$1,599.

SINGAPORE - Sony is delivering the next frontier of home entertainment with the launch of BDV-N990W, its latest 5.1ch 3D Blu-ray Home Theatre System. Based off Sony’s distinctive Monolithic design concept, the BDV-N990W’s beautifully-curved lines and slender satellite speakers make it a stunning addition to any living room, while promising greater design and décor flexibility with its two-way setting layout.

The new BDV-N series also works as a server to deliver music to the entire home via its built-in Wi-Fi, allowing users to enjoy an all-round home entertainment experience with other HomeShare supported audio products connected to their home network. This is perfect when opening up the home for guests or a party, with the same music being played simultaneously from different devices. It also provides convenient volume control of network speakers via the graphic user interface in the living room, eliminating the need to individually adjust the speakers located in different rooms.

The BDV-N990W enables users to create their own 3D cinematic experience in the comfort of their homes, putting them right in the middle of the action. Together with a 3D HDTV and 3D glasses, the BDV-N990W delivers the ultimate in at-home 3D viewing experience in HD.

Featuring Sony’s proprietary DLNA technology, home owners can also make the most of their favourite music, photos and movies stored on other Sony DLNA-enabled products such as its tablets and smartphones to effortlessly “throw” the content wirelessly to the BDV-N990W for enjoyment on a bigger screen or for more sound with its home theatre system.

The BDV-N990W is now available at all Sony stores and authorised outlets and will retail for S$1,599.

Join HWZ's Telegram channel here and catch all the latest tech news!
Our articles may contain affiliate links. If you buy through these links, we may earn a small commission.
Previous Story
Canon imageCLASS LBP6680x Increases Productivity for SOHOs
Next Story
Automatic App Download Might Debut in OS X Mountain Lion