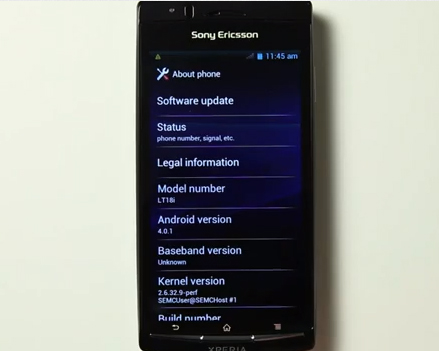 Newbies, do not try this at home. Sony Ericsson has just made an alpha Google Android 4.0 Ice Cream Sandwich ROM for its Xperia lineup available to download on its developer site. For now, the early release can be loaded onto devices such as the Sony Ericsson Xperia Arc S, Xperia Neo V and Xperia Ray.

Besides HTC and Samsung, Sony Ericsson is also one of the few companies that have injected their own flavor into the Android lineup over the past few months. Though it was Huawei, not Sony Ericsson, that gave consumers a first look at how Android 4.0 looks outside of the Samsung Galaxy Nexus, this is the first time we're seeing how customized user interfaces will work alongside Android 4.0, with a video to showcase it.

The first half of the video didn't toss up any surprises in Sony Ericsson's user interface, but we soon saw elements of Android 4.0 making an appearance. Instead of the four shortcuts within the user interface, we noticed how a long press of the home button brought up the multi-task bar. Closing web pages and apps by swiping to the sides and a revamped notification drop-down menu were also spotted as part of the Android 4.0 update.

The caveat that comes with this early ROM are the steps required to unlock the bootloader on these Xperia phones and by the loss of certain features, which are either turned off or still not in working condition. According to Sony Ericsson, the Bring up phase will see the following features being deactivated:

The post has detailed instructions on where the alpha ROM for the three Xperia devices can be downloaded, and the steps taken to install the ROM. Do note that this is recommended for advanced users who are familiar with the steps.

If you're not too sure or wish to retain full functionality of your phone with Android 4.0, our advice is to be patient and hold out for the final update, which is expected sometime in March 2012.

Source: Sony Ericsson via The Verge

Join HWZ's Telegram channel here and catch all the latest tech news!
Our articles may contain affiliate links. If you buy through these links, we may earn a small commission.
Previous Story
LG to Integrate 2012 Cinema 3D Smart TVs with Intel WiDi
Next Story
Xperia and Box Offer the Gift of Online Storage This Festive Season