Sony has introduced its first wireless portable charger, the CP-W5. 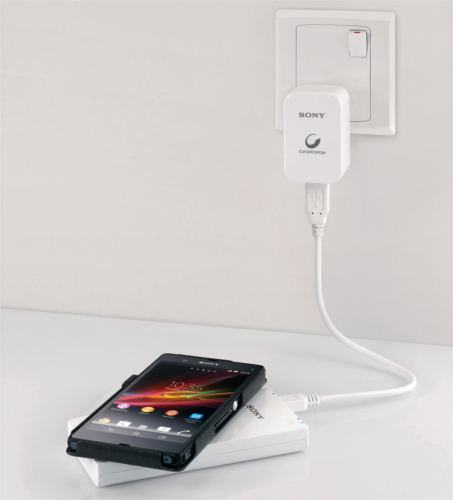 Utilizing an electromagnetic field, the new charger charges Qi-compatible devices wirelessly. It also lets you charge via a MicroUSB cable, just in case you prefer juicing up your device using the conventional way. It has a high output of 1.0A when charged wirelessly, and 1.5A when used with a cable.

On top of this, the CP-W5 serves as a charging plate when connected to an AC power supply. Just place your Qi-compatible device on top of it, and both your device and the CP-W5 will be charged simultaneously. With a Sony-made 5,000mAh rechargeable lithium-ion battery, the portable charger incorporates Sony’s Hybrid-Gel Technology, allowing it to retain more than 90% of its capacity even after 1,000 charges.

The CP-W5 USB Portable Charger comes in white, and will be available from April 2014 onwards.