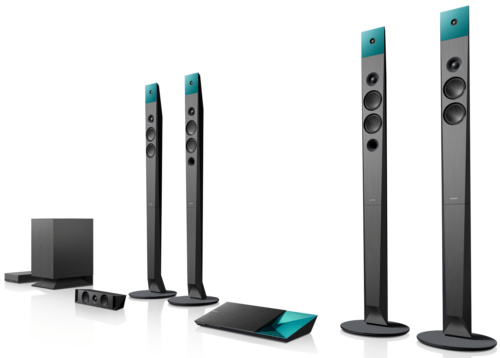 Inspired by the cut-glass edges and gleaming facets of rock crystal, the N-series home cinema systems are complemented by 4K up-scaling capabilities, making a night in front of the TV feel like a trip to the movies. The N-series speaker units feature Sony’s revolutionary Magnetic Fluid Speaker technology by using an advanced ferrofluid material developed by NASA for its space programme. With this technology, the ground-breaking speakers are able to achieve more accurate, revealing sound – even at high volume levels. Launched in 2012 in the BDV-N series, the latest Magnetic Fluid Speakers come with a new glass fibre woofer that enhances efficiency and reduces weight of the voice coil, diaphragm and edge.

With an option for floor-standing speakers with the BDV-N9100W speakers and smaller table-top speakers with the BDV-N7100W, users can choose their ideal Home Cinema System according to their furniture arrangements or space capacities at home. For those who are looking for a simpler yet powerful model, the BDV-E3100 is the ideal choice, with its 1000W of total power output, Dolby TrueHD and DTS-HD Master Audio features. Karaoke fans will also appreciate the Karaoke features that come with the BDV-E3100, such as auto voice control, echo control and Karaoke-PON, which lets you sing along with any stereo-recorded disc by turning down the singer’s voice.

All three home cinema systems also feature Near Field Communication (NFC) and Bluetooth capabilities. Just touch your NFC- and Bluetooth-enabled Android devices briefly against the Home Cinema System and instantly stream crystal-clear music wirelessly from your mobile device. With Sony’s unique Digital Music Enhancer, Bluetooth listening is enhanced with unique audio technologies that cleans up the sound and restore high frequencies lost in heavily-compressed music files. The built in Wi-Fi connectivity easily enables you to connect the home cinema systems to other home devices so you can enjoy streamed HD videos on your TV screen.

Furthermore, you can control the Home Cinema Systems from your Xperia Tablet or Xperia smartphone with TV SideView. This free app for Android or iOS users enables you to browse programme listings, explore online services and discover more content related to the show you’re watching.

The new Football Mode found in the BDV-N9100W and BDV-N7100W Home Cinema Systems brings you the excitement of a big match without you having to be physically there. Perfect for football fans, the entertainment systems use acoustic data captured at an international football stadium and immerse you in the action as if you’re really there in the stands. At the touch of a button, you can mute the commentator and really get into the game. A winning result for any sports lover, the Football Mode also enhances enjoyment of other sports like rugby, tennis or motorsport.

The new generation of Home Cinema Systems from Sony will be available at all Sony stores and authorized outlets from end May 2013 onwards.

Join HWZ's Telegram channel here and catch all the latest tech news!
Our articles may contain affiliate links. If you buy through these links, we may earn a small commission.
Previous Story
All New Homes to be Installed with Fibre Points According to Revised Code by IDA
Next Story
Experts Believe Self-Driving Cars Will Not Become Mainstream Until 2025