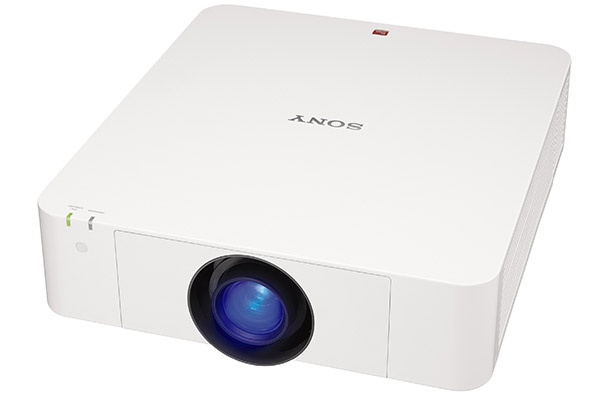 To reiterate, a laser light source means there’s no lamp that needs to slowly warm up or cool down, no lamp to limit tilt angle, and no compromise between high brightness and high resolution. These 3LCD engine-based Sony laser projectors also claim up to 20,000 hours of usage with near-zero maintenance needed. In addition, they have a wide powered lens shift for installation in challenging environments, and the ability to combine with a variety of optional lenses, including a short throw and tele-zoom covering up to 4.84:1 throw range.

All the new models also have built-in HDBase interfaces, enabling easier connectivity and reducing total system costs by using a single cable, which runs all the video, audio, control and IP signal up to 100m. Sony has also developed a new intuitive unified control protocol for its Sony projector line, for easier integration of varying models used in the same installation. Sony says major control system manufacture partners like Crestron, Extron, and AMX will support this new control protocol.

For those who prefer more traditional lamp-based projectors, Sony has also announced two lamp-based models: the VPL-FW65, (6,300 lumens, WXGA) and VPL-FW60 (5,200 lumens, WXGA). They share many features with the existing models in Sony’s lineup, such as a BrightEra panel tech for natural-looking and vivid colors, and a Reality Creation tech that analyzes and processes every input signal to refine detail, clarity, and sharpness for naturally up-scaled images.

The new Sony projectors will be available in selected Asia Pacific countries at the following dates:

Join HWZ's Telegram channel here and catch all the latest tech news!
Our articles may contain affiliate links. If you buy through these links, we may earn a small commission.
Previous Story
The new ASUS Zen AiO Pro has a 4K display and is available in gold
Next Story
Tidal app surges to top of charts, thanks to Kanye West exclusive