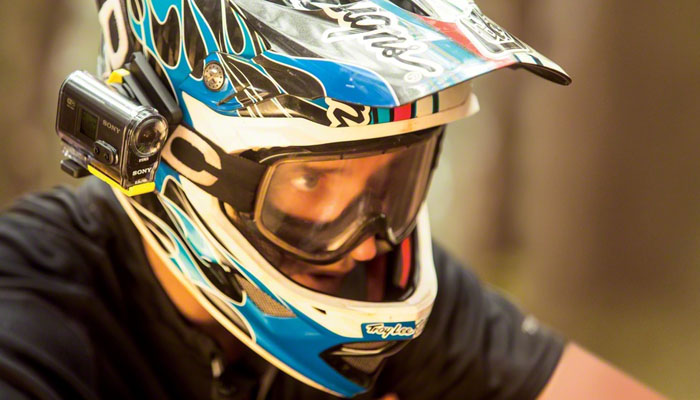 Keeping with the slim wearable form of the HDR-AS30V, the slightly lighter HDR-AS20 (83g wtih battery compared to the HDR-AS30V's 90g) is built to go wherever your quest for thrills takes you. It again features a wide-angle Zeiss Tessar lens with a 170o field of view (120o with SteadyShot on), a stereo microphone for rich, natural sound, and SteadyShot to reduce judder and vibration as you hurtle down dirt paths or fight the wind and the surf.

The back-illuminated Exmor R CMOS sensor ensures for great still pictures and excellent Full HD 50p video even in low light, and the camera supports high bit-rate recording at up to 28Mbps to ensure crisp, detailed footage, even in busy scenes. Built-in Wi-Fi connects the camera to the wearable RM-LVR1 Live-View Remote, which allows you to check shots and control up to five cameras from your wrist.

Battery life is improved compared to the HDR-AS30V, with the camera capable of doing non-stop footage for up to 130 minutes with Wi-Fi on, and 150 minutes with Wi-Fi off. The HDR-AS20 again works seamlessly with Sony’s free PlayMemories Home app, allowing you to easily edit and upload your footage for the day to Facebook and Youtube. While a new Video Merge function allows you to create split-screen composites of up to four simultaneous views.

The HDR-AS20 Action Cam will be available in Asia Pacific from July 2014. Price to be announced.

Join HWZ's Telegram channel here and catch all the latest tech news!
Our articles may contain affiliate links. If you buy through these links, we may earn a small commission.
Previous Story
Dell Launches a Range of Systems for both Business and Consumers Locally
Next Story
Skype Announces Skype 5.0 for iPhone