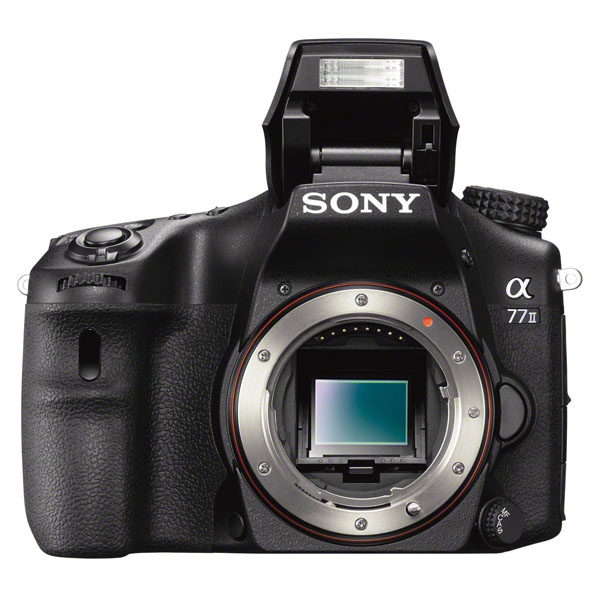 Sony has just announced the A77 II, an A-mount camera that contains the world’s highest phase-detection AF point count: 79 points with 15 cross points within the most frequently-used central area of the sensor. This provides for fast and accurate focusing, while a dedicated f/2.8 AF point placed right in the center of the sensor supports large apertures (up to f/2.8), enabling maximum AF precision.

A brand new AF algorithm uses data from all 79 points to predict your subject’s next movement. Expanded Flexible Spot mode maintains focus even if the selected AF point loses track of the subject, activating eight surrounding AF points to recognize the subject.

Lock-on AF mode lets users select one of four AF area modes (Wide, Zone, Flexible Spot or Expanded Flexible Spot). In this mode, the camera keeps tracking as long as the shutter button remains half-pressed. As the subject moves or if framing changes, the camera automatically selects the most appropriate AF point from the 79 available. The degree of subject-tracking duration can be fine-tuned in five steps (when shooting still images in AF-C mode), and AF Tracking Duration can also be selected between High, Medium and Low during Full HD movie shooting.

Compared to the A77, the A77 II has a sensitivity boost of about 20% thanks to the 24.3 megapixel Exmor CMOS sensor, which uses the same gapless on-chip lens design as the A7R and A6000, and has an ISO range of 100-25600. The BIONZ X image processor from the A7 and A7R also makes its way into the A77 II, as does the 3.0-type Xtra Fine LCD from the A99. WhiteMagic technology ensures that the screen stays visible even in bright sunshine, while the XGA OLED Tru-Finder features three times the contrast and resolving power as the previous version.

The A77 II does Full HD 60p and 24p movies using the AVCHD 2.0 format, and Translucent Mirror Technology means you get full-time phase-detection AF, ensuring accurate focus tracking with fast-moving subjects while you’re capturing video. Three-level AF tracking sensitivity adjustment, a pro-style Zebra function and audio level metering have been added, and now there’s the addition of a clean HDMI output that allows viewing on an external monitor and recording without compression to an external storage device.

Also announced, is the release of Sony’s “A Library” app for tablets and smartphones on Google Play and the iOS App store. The “A Library” holds two types of content. “A Lens catalog” showcases the entire line up of α lenses and provides key information and specifications about which lenses are best suited to different types of photography. The bi-annual “A Magazine” showcases “the boundless fun of photography”.

The A77 II will be available in Asia Pacific from May 2014. Pricing to be announced.