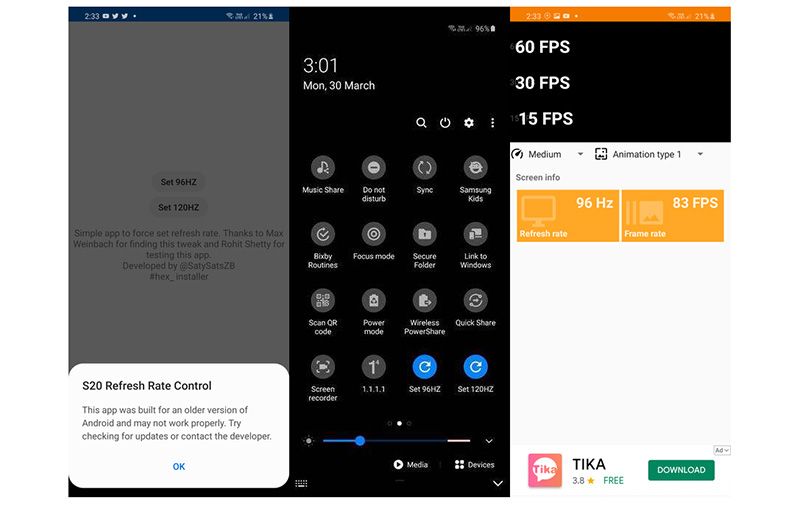 Over the weekend, a Samsung Galaxy S20-using friend told me excitedly how he has enabled 96Hz on his phone via ADB (for those hearing this for the first time that’s Android Debug Bridge, a command-line tool that lets you communicate directly to the device). I didn’t write about it because that sounds like a hassle (entering the commands, not writing the article, mind you) and I was kind of hoping that someone would whip up a GUI to make the process simpler.

Well, someone did. According to GSMArena, XDA forum member SatySatsZB has created a S20 Refresh Rate Controller app that lets you easily toggle between the Galaxy S20/S20+/S20 Ultra’s 96Hz and 120Hz refresh rates. The app also includes two tiles that you can put in the Quick Settings menu so you don’t even need to launch the app.

To be clear, while the S20 phones technically support 96Hz, Samsung didn’t officially make it a user-facing setting. Which is to say: use this app at your own risk. Also, GSMArena highlighted this Reddit thread in which some posters said that this method caused problems on their Exynos-powered S20 phones (and also some who said it worked fine).

Finally, this 96Hz refresh rate still requires you to run the display at FHD+ resolution. So what’s the point? In theory, running at 96Hz should tax the phone less than running at 120Hz, and this should in turn translate to longer battery life. I’ve no concrete figures on how this affects battery life, so drop us a note if you’ve any experiences to share.

Join HWZ's Telegram channel here and catch all the latest tech news!
Our articles may contain affiliate links. If you buy through these links, we may earn a small commission.
Previous Story
Ubisoft is releasing lots of free games to entertain you during the Covid-19 lockdown
Next Story
Pre-order starts for Oppo Reno3 and Reno3 Pro - available on 10 April