Sold out: Pre-order stocks for the Huawei Nexus 6P in Singapore

There was a time when Nexus smartphones weren't as popular as other Android flagship smartphones in Singapore. With the Huawei Nexus 6P, it seems that everything has changed.

Lazada Singapore began taking pre-orders for the Nexus 6P at 10AM earlier this morning, but stocks soon run out as soon as pre-orders started. Several HWZ forum members commented in the "Huawei Nexus 6P (2015) thread" that they were unable to secure their preferred sets. The first comment surfaced at 10AM with other comments coming in within minutes. 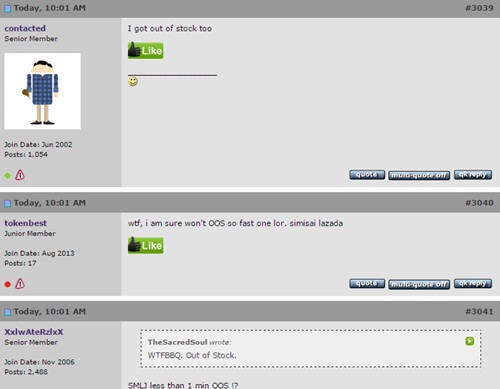 It appears that stocks were gradually released five minutes after the pre-order begun as some forum members managed to submit their orders.

There were several complaints on Huawei Singapore's Facebook Page about the pre-order. According to Huawei, the response "was overwhelming" and stocks ran out faster than they expected.

Despite the issues reported, this pre-order saga proves one thing - Huawei and Google have a winner on their hands! To find out more about the Nexus 6P, do check out our initial impressions. Stay tuned to our full review shortly.