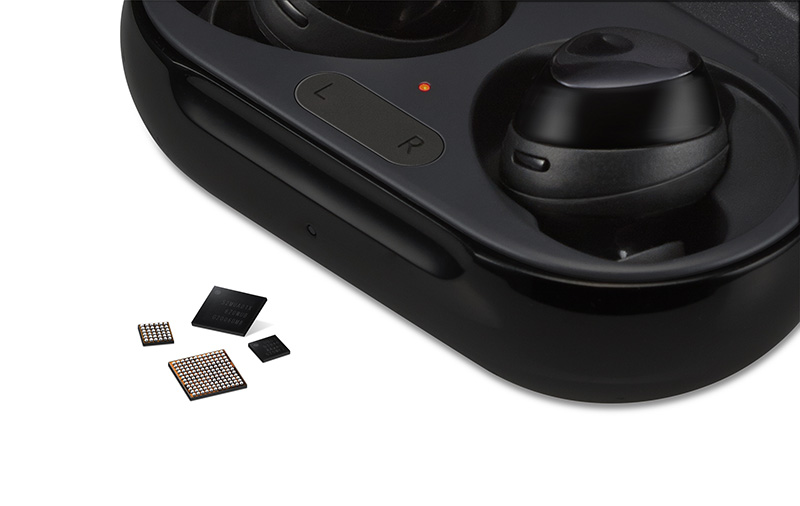 The new Samsung Galaxy Buds+ true wireless earbuds are widely praised for their long 11 hours battery life. The case is also able to provide another full charge, bringing total running time to 22 hours. In case you’re unaware, that’s a big jump from the 6 hours offered by the 2019 Galaxy Buds and another 7 hours with its case. How did Samsung manage this feat?

The obvious answer is that Samsung is using a bigger battery, both in the Buds+’s earbuds and in the case. For comparison, each earbud’s battery is rated at 85mAh and its case has another 270mAh, up from the 58mAh and 252mAh cells in the OG Buds’ earbuds and case. So now the question becomes: how did Samsung manage this feat considering both generations have the same form factor?

It turns out that the Galaxy Buds+ uses Samsung’s new all-in-one power management integrated circuits (PMICs) designed for true wireless stereo (TWS) headphones. By integrating multiple discrete components into one, the new PMICs — MUA01 and MUB01 — occupy less space than previous alternatives, which in turn allow Samsung to pack a bigger battery in the same space. The good news is that these two PMICs are now in mass production and Samsung is selling them to other manufacturers for use in their TWS devices.

For those interested in the nitty-gritty, the MUA01 goes into the charging case. The bigger PMIC of the two, this 10-in-1 part combines a whole host of components into one chip, from the microcontroller unit (MCU) and linear charger to the wireless charger (supports the newest Qi 1.2.4 standard, too) and discharge circuit.

On the other hand, the MUB01, which integrates five components, goes into the earbuds. Samsung says that the PMICs support power line communication, which means the case and earbuds can pass information such as battery levels to each other over the charging pins.

The Samsung Galaxy Buds+ is now in stores and has a suggested retail price of S$268. Samsung currently makes the earbuds in five colours (white, blue, black, red and pink) but the red and pink versions aren't sold here.

Previous Story
Xiaomi's smart projector and handheld vacuum is here to keep you company at home
Next Story
Sanitise and wirelessly charge your smartphones with the Momax Q.Power UV-Box