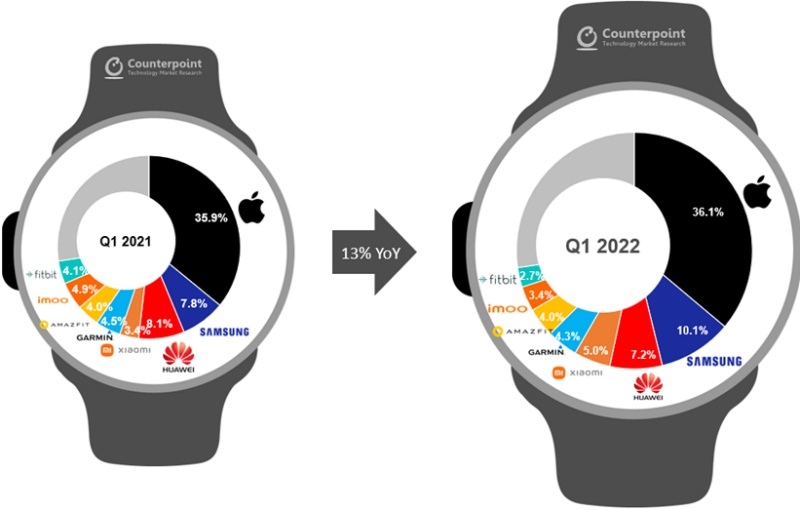 Despite the economic slowdown, inflation and global shortage in components, the global smartwatch market continued to grow according to data from Counterpoint Research's Global Smartwatch Model tracker.

Samsung came in at second position with 10.1% and saw shipments up by 46% YoY. The popularity of the Galaxy Watch4 series in the APAC region contributed significantly to its accelerated growth.

Huawei secured the third position with 7.2%, but shipments were flat YoY. Xiaomi attained the fourth position for the first time with 69% YoY growth. Its shipment record continues to achieve new high every quarter. Its success is attributed to sales in the low-end segment under $100.

While Garmin ranks fifth in shipments, it is third in terms of revenue thanks to its higher ASP. It is also dominant in the premium segment over $600.

Looking ahead, Counterpoint Research says the prolongation of the Russia-Ukraine war and global supply disruptions may have a bigger impact on the smartwatch market.

Join HWZ's Telegram channel here and catch all the latest tech news!
Our articles may contain affiliate links. If you buy through these links, we may earn a small commission.
Previous Story
The X-H2S is Fujifilm's newest flagship X series camera
Next Story
ASUS reveals ROG Crosshair X670E Extreme motherboard for Ryzen 7000 chips