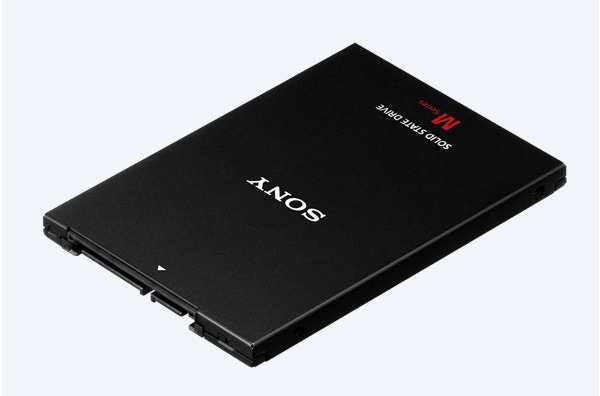 Sony has just announced its brand new SLW-M series of SSDs, the company’s first ever internal SSDs for use in PCs and laptops. Sony currently offers a portable SSD storage drive, and the SLW-M SSDs may just be a logical next step for a company that already makes a range of external SSD and HDD products.

Sony is claiming sequential read and write speeds of up to 560MB/s and 530MB/s respectively on the SATA 6Gbps drive. Its slim 7mm profile also means that you should be able to install it in select notebooks with upgradeable drive bays, and it comes with a 9.5mm spacer as well.

The drive comes bundled with Sony’s SSD Toolbox – to quickly view things like firmware versions and check that the SSD is performing up to speed – and the 2015 edition of Acronis True Image HD, a disk cloning utility. Built-in features like Garbage Collection also work to prepare free space in advance by consolidating data, while wear-leveling mechanisms help to prolong the life of the SSD. There is also support for Error-Correcting Code functions, which allows the drive to detect and correct instances of internal data corruption.

The SLW-M series SSDs are available locally now in all Sony stores in 240GB and 480GB capacities and cost S$139 and S$259 respectively.

Join HWZ's Telegram channel here and catch all the latest tech news!
Our articles may contain affiliate links. If you buy through these links, we may earn a small commission.
Previous Story
GoPro will streamline its camera portfolio in April
Next Story
OCZ has a new entry-level SSD, introducing the Trion 150