SingTel today announced that it has expanded its high-speed 4G mobile network to offer nationwide coverage with speeds of up to 150Mbps. SingTel’s 4G subscribers can now enjoy nationwide street-level coverage, as well as indoor coverage in more than 550 buildings, including shopping malls, hotels and other commercial properties. 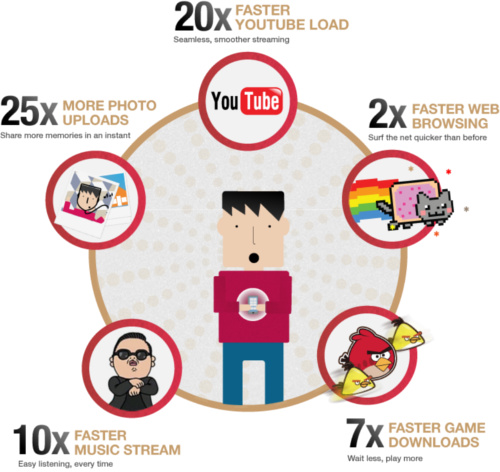 SingTel’s 4G network is the first in Singapore to offer dual-band street-level coverage nationwide. This dual-band capability doubles the data-handling capacity of the network, allowing customers to enjoy a superior multimedia experience during peak periods for applications such as video and music streaming, web surfing, file downloads and online games.

As another first, SingTel is progressively deploying cutting-edge Multiple-Input-Multiple-Output (MIMO) technology in commercial buildings to boost maximum user download speeds from 75Mbps to 150Mbps. SingTel has so far deployed MIMO in busy locations such as Nex, Jurong Point, Changi Airport and Tampines Mall. With this technology, SingTel's network will be ready for the next generation of 4G devices, which will support speeds of up to 150Mbps. Such devices are expected to be available from the second half of this year.

As part of an accelerated network upgrade programme, SingTel has also enhanced its 3G network to offer customers with compatible devices download speeds of up to 42Mbps, which is double the maximum speed of 21Mbps they previously enjoyed. All 3G Flexi plan subscribers will be progressively upgraded to 42Mbps over the coming months at no extra charge.

SingTel prioritizes its ongoing 3G network enhancements based on customer feedback. In October 2012, it embarked on a programme to upgrade the network in 20 shopping malls and 55 heartland residential locations nominated by customers. So far, enhancements in 17 malls have been completed and significant progress has been made in heartland locations.

SingTel is able to enhance and upgrade its networks quickly and seamlessly because it uses a single network vendor to deploy its 2G, 3G and 4G services. Studies have shown that services based on single vendor networks are more reliable and secure as they are simpler to manage and maintain. Customers are assured a better quality of service.