Singtel to offer up to nine months complimentary Netflix subscription

Singtel offers up to 9 months of free Netflix subscription

Note: This article was first published on 15th January 2016. 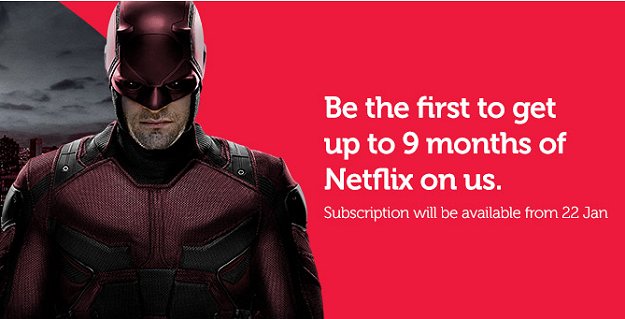 Singtel has announced a partnership with Netflix that will give customers up to nine months of complimentary standard Netflix subscription when they recontract or sign up for the telco's mobile, fibre internet and/or television services. Here's how the different free tiers are offered:-

These free months can be applied to both new and existing Netflix accounts, but they have to be a Netflix Singapore account.

The deal will run from 22nd January to 22nd July.

Netflix was launched in Singapore last week and streams movies and television shows online for a monthly fee, starting at S$10.98. The standard plan Singtel is offering costs S$13.98/month which offers high-definition content on two devices at the same time. You can refer to this Netflix Singapore launch news for the full set of plans.