If you spend most of your time online playing games, watching videos and downloading stuff, take note because there is a new high-end fiber broadband plan coming your way.

Called simply the Unlimited Fiber Plan, this latest plan from SingTel promises uncapped performance at all times of the day. As we have mentioned previously in our fiber broadband guide, the three major telcos - SingTel, StarHub and M1 - do engage in some form of traffic management, especially during peak hours to ensure a certain level of performance and service for all their customers.

However, SingTel has said that it will not throttle the performance for subscribers to its new Unlimited Fiber Plan, even for P2P traffic. Also, it did not specifically state a speed because speeds will be entirely dependent on the constraints of the existing NGN infrastructure, router, host servers and content providers.

In a nutshell, what SingTel is saying that speeds will be the highest possible for subscribers of this plan. Even so, it did go on to state that users will be able to enjoy performance of up to 800Mbps for local connections 95% of the time. To prove their point, they gave us a live demo of their new fiber plan. 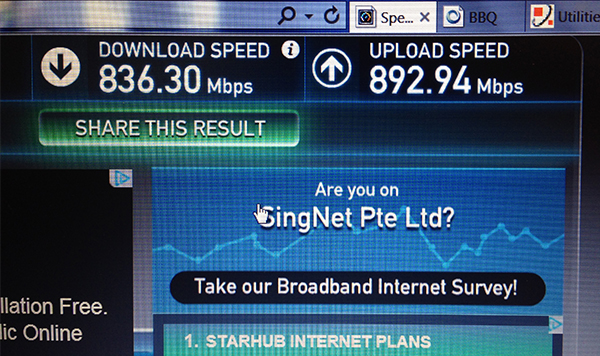 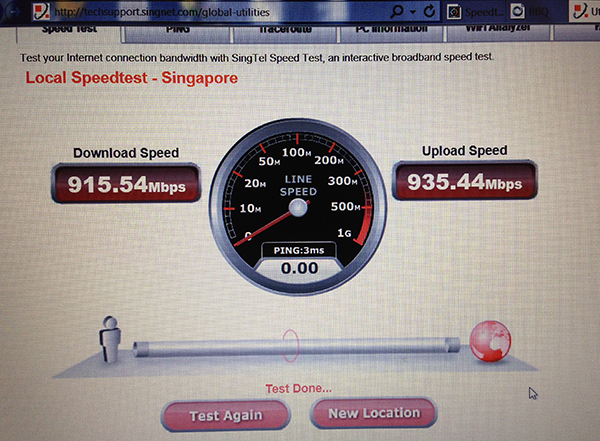 That sounds great, but as we all know, most of the Internet content that we consume is not necessarily based in Singapore, so what about performance overseas? Well, in a speed demo showed to us, we saw download speeds of over 700Mbps and uploads speeds in excess of 140Mbps to a server based in Los Angeles, California. Pretty impressive. 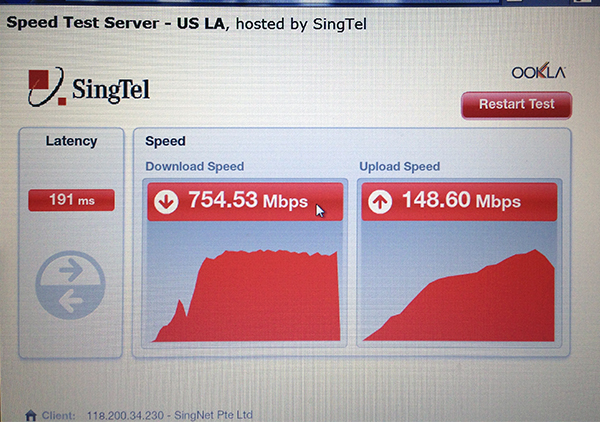 Subscribers to this plan are also free to pick their router to use, but SingTel is offering a special bundle allowing customers who sign up to purchase the new ASUS RT-AC87U router at S$100 off its retail price. Unfortunately, this also means that the new plan will be incompatible with Mio TV, so if users wish to continue to subscribe to Mio TV, they can opt for a standalone package.

Apart from a discount on the new ASUS RT-AC87U router, subscribers will get to enjoy a 10% mobile line discount, 25% discount on VyprVPN and also free Digital Homeline with unlimited local calls. And if you sign up between August 28 and August 31, you will also get an additional $200 handset discount and $40 CapitaMall voucher.

As for pricing, the new Unlimited Fiber Plan will be available at a special promotion price of S$69.90 (two-year contract) for a limited time period. Regular price is S$99.90. Another thing to note is that the earliest date that SingTel can begin scheduling installation dates is on September 19 onwards (roughly 3 weeks from now).

Previous Story
Apple has one more thing to unveil on September 9, the much fabled iWatch
Next Story
ASUS ZenFone 5 LTE available in Singapore on August 30 from S$249