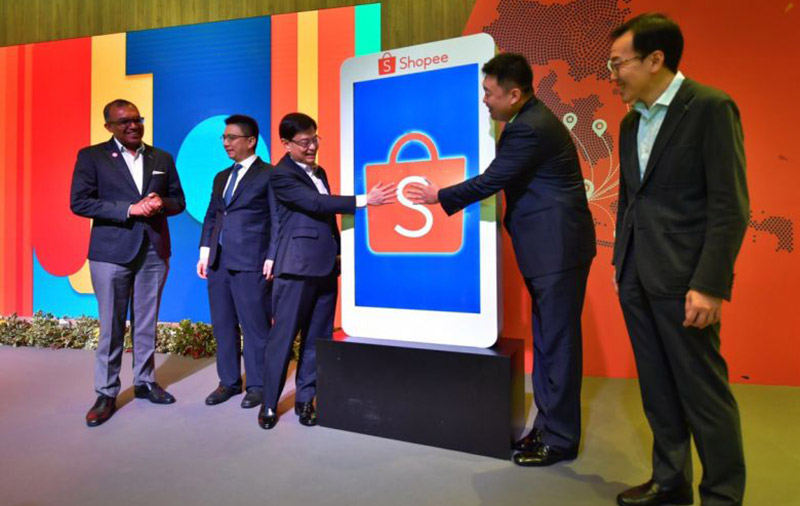 This article by Melissa Heng first appeared in the Straits Times on 3rd Sep, 2019.

Home-grown shopping platform Shopee opened its new six-storey regional headquarters in Kent Ridge on Tuesday (Sept 3) in a move that bodes well for Singapore's push into the digital economy sector.

Since its launch in 2015, Shopee, which is owned by consumer internet firm Sea, has grown into one of South-East Asia's leading e-commerce platforms, with operations in Singapore, Thailand, Malaysia, Vietnam, the Philippines, Indonesia and Taiwan.

In the second quarter of 2019, the platform achieved 246.3 million orders regionally and recorded a gross merchandise volume of US$3.8 billion (S$5.3 billion).

Deputy Prime Minister Heng Swee Keat, who officiated the opening, said Shopee's growth is aligned with Singapore's plans for growing the economy and positioning itself as a hub for the region to harness the potential of the growing digital economy.

"The rise of South-east Asian and Asian economies brings opportunities, and we must position Singapore well to harness them. We have to constantly strive to ensure that companies like Shopee, doing business across the region, will continue to see Singapore as an ideal base for serving the region," he said.

He added that companies in the region can also look to Singapore as a springboard to going global. "We strive to serve as a global-Asia node - in linking the world to Asia and Asia to the world."

Mr Heng also spoke about efforts to build up Singapore's value to the business economy. He cited ongoing plans for a pathfinder Digital Economy Partnership Agreement with Chile and New Zealand, collaboration with Australia on digital economy initiatives, and investments in research and development in the services and digital economy domain.

"Our efforts to grow our digital economy, transform our industries, and build new capabilities are wide-ranging, but our overarching intent is clear. Ultimately, these must translate into good jobs for our people," he said. In four years, Shopee has grown from just 10 employees to over 1,500 staff and the new office can accommodate up to 3,000 employees.

A report by product comparison website iPrice in August showed Shopee extending its lead over rival Lazada as the most visited Internet shopping platform in the region.

Shopee had a monthly average of 200.2 million visits via both desktop and mobile gadgets in the second quarter, while Alibaba-owned Lazada was ranked second with 174.4 million visits.

Shopee's new 244,000 sq ft office is almost six times larger than the previous one at Ascent Building in Science Park Drive. The new building has a 3,000 sq ft gym, nap pods on every level, and a fun zone with pool tables and foosball tables.

"Expanding the tech talent pipeline and nurturing an entrepreneurial ecosystem for sellers and SMEs will continue to be areas of focus for us," he said.

As the company continues to expand, The Straits Times understands that Shopee will look to hire more data analysts, data scientists, software engineers, and developers who specialise in machine learning and artificial intelligence.

Shopee has also partnered the Economic Development Board and local universities to nurture data scientists at the postgraduate level.

Mr Zhou said: "This new office marks a significant milestone in our journey thus far, and sets the stage for us to solidify our leadership position."

Our articles may contain affiliate links. If you buy through these links, we may earn a small commission.
Previous Story
Rajang is coming to Monster Hunter World: Iceborne in October
Next Story
Co-creator of Night in the Woods committed suicide following allegations of sexual abuse