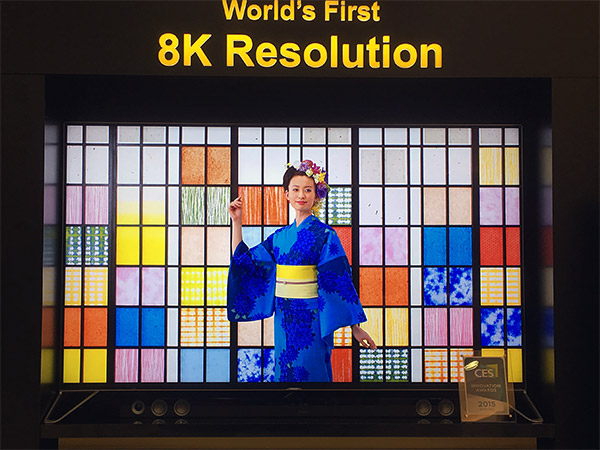 Sharp always has this penchant to explore something different for its Aquos-branded TVs. Back in CES 2014, it introduced a 1080p Quattron+ series that it claimed could display 4K content well. The secret sauce was a combination of the panel’s proprietary RGB+Y (red, green, blue, and yellow) sub-pixel layout and a pixel-splitting technique that cuts the pixels in half and then addresses the resulting clusters differently to boost the resolution.

The Japanese company pulled something similar again at last year’s CES, when it introduced its ‘Beyond 4K’ TV, a native 4K set with a whopping 66 million sub-pixels. Even though this number of sub-pixels is still lower than that of an RGB-based 8K TV, it’s higher than a typical 4K TV. Coupled with the aforementioned pixel-splitting technique and some processing smarts, Sharp is basically touting it as a 4K TV capable of a (near) 8K picture quality.

Since then, I’ve yet to hear anything about this Beyond 4K TV. Until May last year when Sharp announced the ‘Aquos 4K Next’ 4K TV in Japan for this part of the world. Known also as the Aquos XU series, it shares the same pixel-splitting Quattron tech as the Beyond 4K TV we first saw in the U.S., but with a slightly different chipset and feature set. And after going on sale in neighboring countries like Japan, China, Taiwan, and Malaysia last year, the Aquos XU has now arrived in Singapore.

Available in one 80-inch screen size, the LC-80XU930X 4K TV is also equipped with an X8-Master Engine Pro processor to do all the heavy lifting. More specifically, there’s an 8K upscaling circuit within that takes care of upscaling HD and UHD content to 8K, necessary when you consider the scarcity of 4K and 8K content. Interestingly, I was told that due to chipset limitation, the TV can’t handle a true 8K signal.

In addition, the Aquos XU has a ‘Rich Color Pro’ LED backlight system that uses a new fluorescent material to achieve a wider color gamut. Surprisingly, even though Sharp is a member of the UHD Alliance, the Aquos XU isn’t Ultra HD Premium certified. But Sharp says the TV still has high brightness and employs a dynamic range expansion tech to improve contrast and deliver an HDR-like experience to any content. Coupled with the direct-lit LED backlight system and a low reflective ‘N-Black’ panel, the TV did deliver plenty of contrast and image depth during the demo.

Also important to note is that the Aquos XU runs Android TV. This means you’ve hundreds of apps and games on Google Play to choose from (including Netflix), easy content and info searching through Google Voice Search (using the TV’s smart remote), and Google Cast support for quick and easy ‘casting’ of videos, pictures, and music from an Android or iOS mobile device to the TV. Other amenities worth noting include four HDMI ports, three USB ports, and one SD card slot. There’s also support for wired and wireless networking (up to 802.11ac).

Join HWZ's Telegram channel here and catch all the latest tech news!
Our articles may contain affiliate links. If you buy through these links, we may earn a small commission.
Previous Story
The fastest smartphone in 2015 based on AnTuTu benchmark is not an Android
Next Story
Qualcomm inks deal with Samsung to make its Snapdragon 820 chipsets