Is Sharp Losing its Edge?

Is Sharp Losing its Edge? 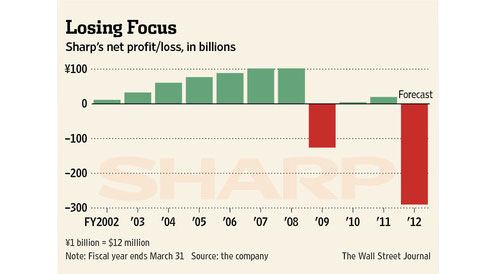 Japanese TV makers aren't having an easy time staying afloat in the market, and Sharp Corporation is no exception. Collectively, Panasonic, Sony, and Sharp have forecast combined losses of US$16 billion for the fiscal year ending in March 31st. And Mr Takashi Okuda, Sharp's soon-to-be president, also doubts that demand for televisions would rise anytime soon. According to The Wall Street Journal, Sharp was once Japan's source of pride for their electronic sector, but has since degenerated into a less impressive force struggling to compete on a global level. Sharp is expecting a 290 billion-yen net loss this financial year (announced on February 1st), as opposed to its earlier and more optimistic prediction of a 6 billion-yen profit.

This forecast is probably Sharp's largest annual loss in the AQUOS TV maker's 99-year history. Ranked as the world's fifth biggest TV maker, Sharp has attributed their heavy losses to weak demands for its core product groups, such as LCD panels, television sets, and solar panels, coupled by strong yen. Changes will be made at the top as well. Come April 1st, Mr Takashi Okuda will succeed existing president Mikio Katayama. Okuda has been with the firm for 34 years, and is currently heading Sharp's overseas operations. In addition, he also cited a lack of foresight and understanding as one of the causes for Sharp's poor returns. "Even though we possess technology to make good products, we haven't been able to launch them in a timely manner because we haven't had a good understanding of the market," said the 58-year-old Mr. Okuda. The company will be unveiling a new business plan by the time its full-year's earnings are announced.

According to Bloomberg's report, Sharp is planning to target the medical and automobile industries after expecting a stagnating demand for TV sets in the consumer sector. The Japanese company is also trying to ramp up production for their IGZO panels - an improved display for smartphones and tablets based on a new oxide material - but is presently facing 'manufacturing problems', based on information provided by the business information services company IHS Inc. In turn, this may well affect the cost and availability of Apple's new iPad which went on sale last week.