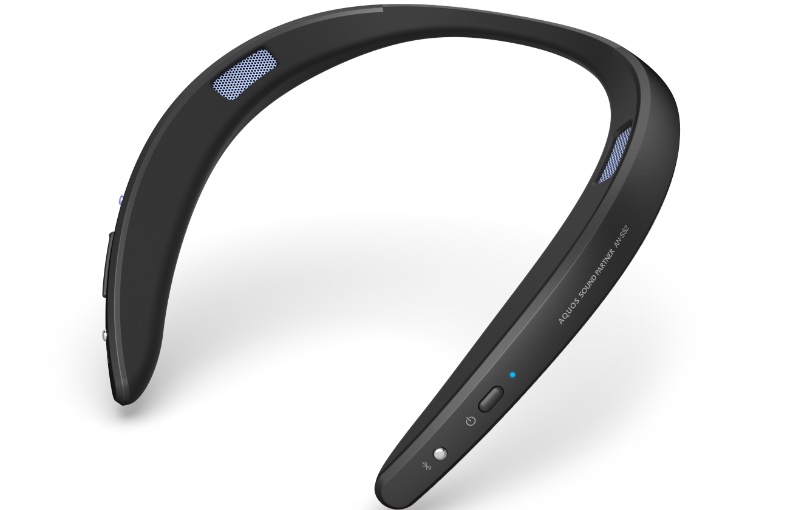 The new Sharp AQUOS Sound Partner sits around the neck bringing sound close enough to the ears without needing to insert earbuds or cover the ears with headphones. Sharps says that beyond great surround sound, users can remain aware of their surroundings as they can still hear traffic and other conversations around them.

It calls to mind similar designs from Bose, Sony, and JVC to name a few.

Designed as an all-in-one portable surround sound unit the Sound Partner does everything from answering calls via voice commands to playing music.

Its sleek round the neck design sits easily for comfort, convenience, and performance while weighing only 88 grams.

Equipped with V5.0 Bluetooth connectivity, it allows the Sound Partner to connect to one device at a time for hands-free use such as answering phone calls using a simple voice prompt. Outdoor use is mostly worry-free with its IPX4 splash-proof rating, so just don't drop it.

Connect it to a smartphone and you can use Siri or Google Assist in English, Japanese and Chinese.

It has up to 16 hours of playback time and according to Sharp, takes two and a half hours to fully charge.

The Bose Soundwear Companion by comparison also connected via Bluetooth 2.1, and had a battery life of up to 12 hours with a full charge time of three hours.

Bear in mind though that using these while exercising or on the move is one thing. Using it in a small or enclosed space like an MRT or in the bus isn’t exactly private as those standing close will hear your music or conversation.

The Sharp AQUOS Sound Partner is available at S$199 on Sharp’s e-store and selected authorised retailers.

Join HWZ's Telegram channel here and catch all the latest tech news!
Our articles may contain affiliate links. If you buy through these links, we may earn a small commission.
Previous Story
ZTE Axon 30 5G with under-display camera retails globally, including Singapore
Next Story
Call of Duty: Vanguard officially announced with a full reveal coming in Warzone