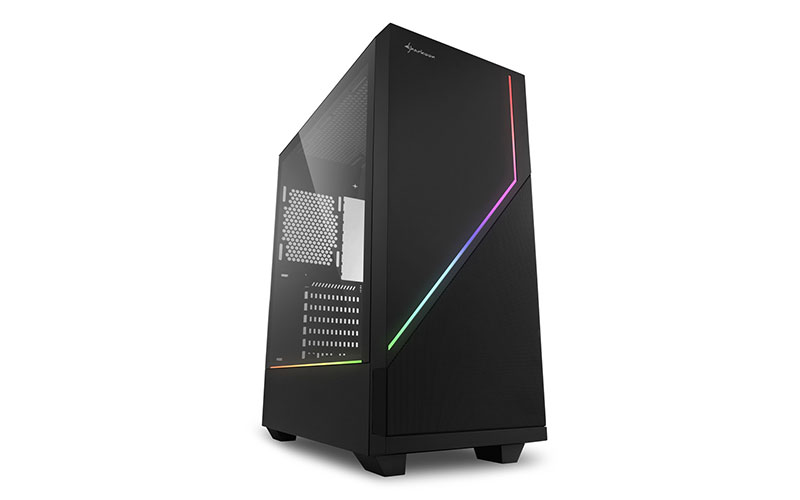 Sharkoon has announced its new RGB Flow ATX chassis, a minimalist case with two integrated addressable RGB strips and room for up to six 2.5-inch SSDs. The company is best known for offering great value-for-money with its cases, and the RGB Flow isn't much different. It's available to buy right now in various stores at Sim Lim Square, or online at Lazada and Shopee, at just S$79.

The RGB Flow comes pre-installed with a single 120mm fan on the front panel, but there's room for up to two 120mm fans in the front, or a 240mm radiator. The case will hold another 120mm fan at the rear and either two 120mm or 140mm fans up top. And while the front panel may look solid, the bottom half is actually a fine mesh, which could help improve airflow.

On the storage front, the chassis has mounts for up to six 2.5-inch SSDs, including two on top of the PSU shroud and two at the back of the motherboard tray. There is also a HDD cage for two 3.5-inch drives at the bottom, but this can be removed if you don't need them.

The RGB Flow has a decent number of front USB ports too, comprising two USB 3.0 and one USB 2.0 connector.

Finally, the tempered glass side panel will let you show off your hardware. It's attached via easily removable thumb screws so you don't have to fiddle with it too much.

Join HWZ's Telegram channel here and catch all the latest tech news!
Our articles may contain affiliate links. If you buy through these links, we may earn a small commission.
Previous Story
Cooler Master's MasterFan SF120M is all about performance
Next Story
Pixel 4 not getting unlimited photo backup to Google Photos at full resolution