Update 2: Hugo Barra has now confirmed with us that the OTA update that will make MIUI's Cloud Messaging service opt-in will be available for all Xiaomi phones.

Update: Hugo Barra has now addressed F-Secure's findings, stating that the data being uploaded is part of MIUI's Cloud Messaging service. An update rolling out today will now make MIUI opt-in, and will no longer automatically activate for new users:

These concerns refer to the MIUI Cloud Messaging service described above. As we believe it is our top priority to protect user data and privacy, we have decided to make MIUI Cloud Messaging an opt-in service and no longer automatically activate users. We have scheduled an OTA system update for today (Aug 10th) to implement this change.

Following allegations that Xiaomi phones may be silently uploading user details to a remote server, Finnish security firm F-Secure set out to investigate.

The firm has now published a blog detailing how a brand new Xiaomi RedMi 1S smartphone silently uploaded a users' phone number, the network being used, the phone's IMEI number, as well as the phone's entire list of contacts to a Xiaomi server.

The security company said that it took a brand new smartphone from the box with no prior set-up or cloud connect allowed. It then followed the following steps:

F-Secure said, "We saw that on startup, the phone sent the telco name to the server api.account.xiaomi.com. It also sent IMEI and phone number to the same server." 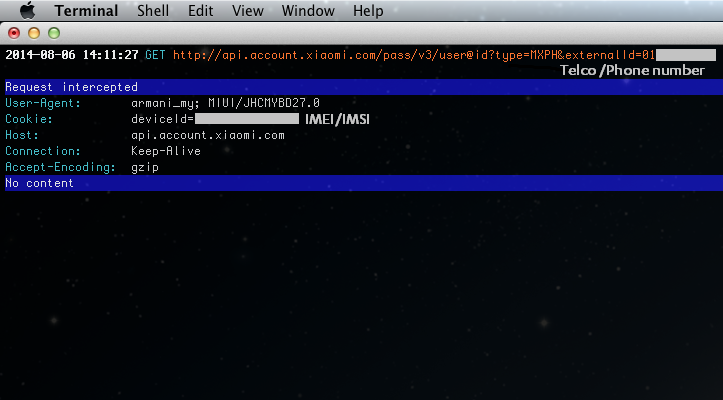 The company then repeated the above steps but this time connecting to the Mi Cloud service. This time around the IMSI details (used to identify the user of a cellular network) were sent to api.account.xiaomi.com, as well as the IMEI and phone number.

This evidence seems contrary to Xiaomi Vice President Hugo Barra's claims when he addressed Xiaomi security concerns in a Google+ post last week, stating "Xiaomi is serious about user privacy and takes all possible steps to ensure our Internet services adhere to our privacy policy. We do not upload any personal information and data without the permission of users."

Join HWZ's Telegram channel here and catch all the latest tech news!
Our articles may contain affiliate links. If you buy through these links, we may earn a small commission.
Previous Story
Samsung Galaxy S5 LTE-A listed on IDA's website, imminent launch in Singapore?
Next Story
Microsoft Unveils S$40 Nokia 130, the most affordable phone with video and music player