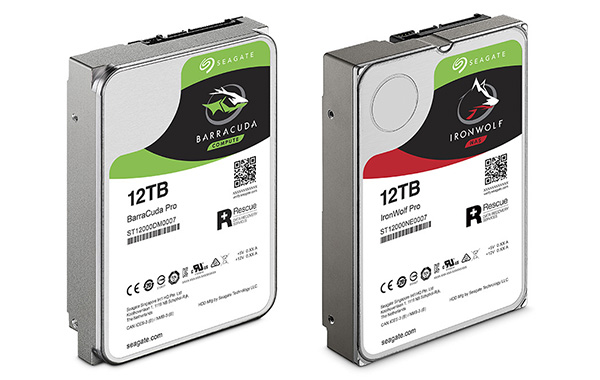 Out of storage space? Good news, because Seagate has just released a trio of massive 12TB helium-based hard disk drives that are targeted at consumers.

These are part of Seagate's Guardian series and the three 12TB drives are additions to the BarraCuda Pro, IronWolf, and IronWolf Pro lineup.

The 12TB BarraCuda Pro is the largest desktop HDD currently available. It was designed for desktop computing and gaming. It spins at 7,200rpm and comes with a 5-year-long warranty.

The 12TB IronWolf drive spins at 7,200rpm and has a claimed workload rate of 180TB per year. It comes with a 3-year-long warranty.

The 12TB IronWolf Pro drive also spins at 7,200rpm but it has a longer claimed workload rate of 300TB per year. It comes with a 5-year-long warranty and 2-year data recovery service.

We are awaiting local availability and pricing details from Seagate and will update this piece once we have them.

Our articles may contain affiliate links. If you buy through these links, we may earn a small commission.
Previous Story
ASUS ZenFone 4 series launching in Singapore in late October but no ZenFone 4 Pro
Next Story
StarHub and OCBC announce "We Economy": Singapore's first bank-telco partnership