Satisfy your need for speed with the new Netgear Nighthawk X8 router, which goes up to 5400Mbps

Satisfy your need for speed with the new Netgear Nighthawk X8 router, which goes up to 5400Mbps 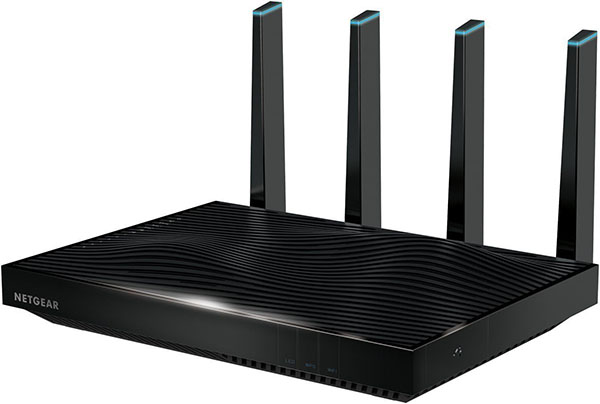 You probably can't tell just by looking, but the Nighthawk X8 that you see above is Netgear's fastest and most costly router.

How fast it is? Try 5300Mbps. That's pretty nuts, but how does it achieve such speeds you may ask. Let us explain.

The Nighthawk X8 is powered by Broadcom's second-generation XStream platform and broadcasts three separate networks. Yes, it's a tri-band router. The single 2.4GHz network offers up to 1000Mbps, whereas the two 5GHz networks offer up to 2150Mbps each. Add them all up and you get 5300Mbps.

It also supports MU-MIMO technology, allowing it to transmit data more efficiently to MU-MIMO compatible clients. If MU-MIMO sounds alien to you, we suggest you read our introduction of MU-MIMO here.

And as befits a high-end router, the Netgear Nighthawk X8 features dynamic QoS and six Gigabit Ethernet ports of which two can be aggregated to double the connection speed to a compatible NAS system. The Nighthawk X8 also features Netgear ReadyCLOUD, allowing users to easily create their own personal cloud.

If you are interested, the Netgear Nighthawk X8 goes on sale later this month for S$699. Yup, we know what you are feeling, but then no one ever said performance came cheap.

Join HWZ's Telegram channel here and catch all the latest tech news!
Our articles may contain affiliate links. If you buy through these links, we may earn a small commission.
Previous Story
Find out why Daniel Craig resisted using an Android phone in Spectre
Next Story
AMD just got sued for allegedly misrepresenting Bulldozer core count