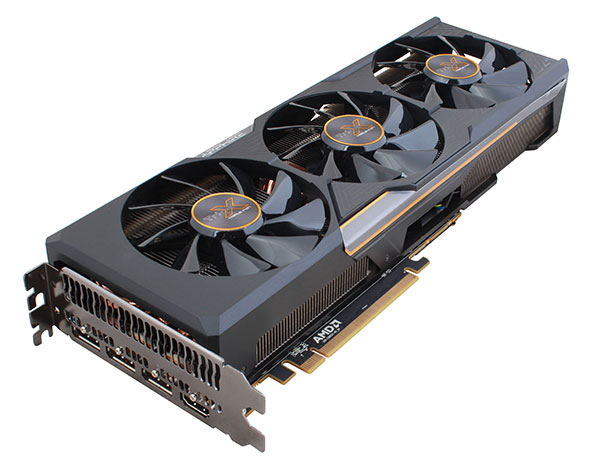 The Radeon R9 Fury features a cut-down version of the Fiji GPU found on the Fury X. This is to the tune of 3,584 stream processors, 224 texture units, and a lower core clock of 1,000MHz.

According to Sapphire, the Tri-X Radeon R9 Fury features the most efficient iteration of the Tri-X cooler so far. It features multiple heatpipes comprising two 8mm and four 6mm pipes, in addition to an extra-thick 10mm central pipe for better heat dissipation.

Sapphire is also claiming increased air circulation toward the end of the cooler because of its design. A diecast mounting frame supports the PCB and cooler assembly, including the cooling shroud itself. But because of the rather short PCB of the Fury – in part thanks to the space-saving capabilities of High Bandwidth Memory – the cooling fins and shroud extend beyond it. This consequently increases airflow toward the card’s end as the heatsink fins are exposed. There is also a thick aluminium backplate for additional structural support.

In addition, the dual BIOS switch allows users to push the power envelope to 350 watts (up from 300 watts) for greater overclocking headroom. When it comes to display connectors, the Fury similarly lacks a DVI port like the Fury X and has just three DisplayPort connectors and one HDMI 1.4a output.

Our articles may contain affiliate links. If you buy through these links, we may earn a small commission.
Previous Story
How ‘freebooting’ on Facebook is costing YouTubers tens of millions of pageviews
Next Story
Nikon issues another service advisory for the D750 camera