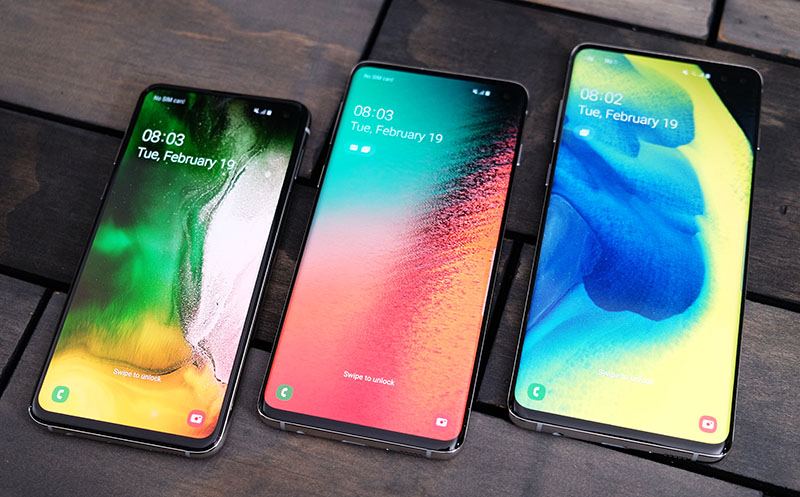 Samsung announced four variants of its latest flagship smartphone at its first Unpacked event of the year in San Francisco today: The Galaxy S10e, the S10, the S10+, and the S10 5G.

As you move up the range, each phone increases in price, display size, features and the total number of cameras it sports - three for the S10e, four for the S10, and five for the S10+ and S10 5G.

The four devices also share some common features, including Samsung's new Dynamic AMOLED Infinity-O display technology, which has a small cutout for the front camera in the top right corner. The S10e is the smallest phone in the lineup, with a 5.8-inch Full HD+ display, while the S10 has a 6.1-inch display, the S10+ has a 6.4-inch display, and the S10 5G has a 6.7-inch display - all three are QHD+ resolution.

The S10e and S10 have a single front camera, while the S10+ and S10 5G sport dual front cameras and an elongated oblong shape camera cutout. All of the phones in the range have a maximum brightness of 1,200nits, and are HDR10+ certified.

The S10e has a side-mounted fingerprint scanner on the power button, while the rest of the line uses a new Ultrasonic in-display fingerprint scanner. According to Samsung, the ultrasonic scanner is the first of its kind, and takes a 3D print of your finger, rather than just a 2D scan. Backing Samsung's claim, it is the first in-display scanner with a FIDO Alliance Biometric Component certification.

All of the phones will be powered by either Samsung's Exynos 9820 chip or Qualcomm's Snapdragon 855, depending on region. We're likely to get the Exynos version. They all also support fast charging, fast wireless charging, and reverse wireless charging, which will let you use the phone to charge other phones, or your Samsung Galaxy Buds wireless earphones.

The entire range also supports Wi-Fi 6 802.11ax and 4G LTE Cat 20 (up to 2Gbps) connections, while the 5G version, as its name suggests, is the only one with 5G connectivity.

“Since its launch ten years ago, the Galaxy S series has stood for premium innovation – offering
consumers an incredible experience, and the ability to find the device that’s right for them,” said DJ Koh,
President and CEO of IT & Mobile Communications Division, Samsung Electronics. “Galaxy S10 builds on
that incredible legacy, and delivers breakthrough display, camera, and performance innovations. With
four premium devices, each built for a unique consumer in mind, Samsung is leveraging a decade of
industry leadership to usher in a new era of smartphone technology.”

Pre-orders for the entire range start tomorrow on 21st February 2019, while the phones will be on sale in March 2019.

Our articles may contain affiliate links. If you buy through these links, we may earn a small commission.
Previous Story
Samsung's new Galaxy Watch Active is all about fitness
Next Story
The Samsung Galaxy S series: 10 years of pushing smartphone boundaries