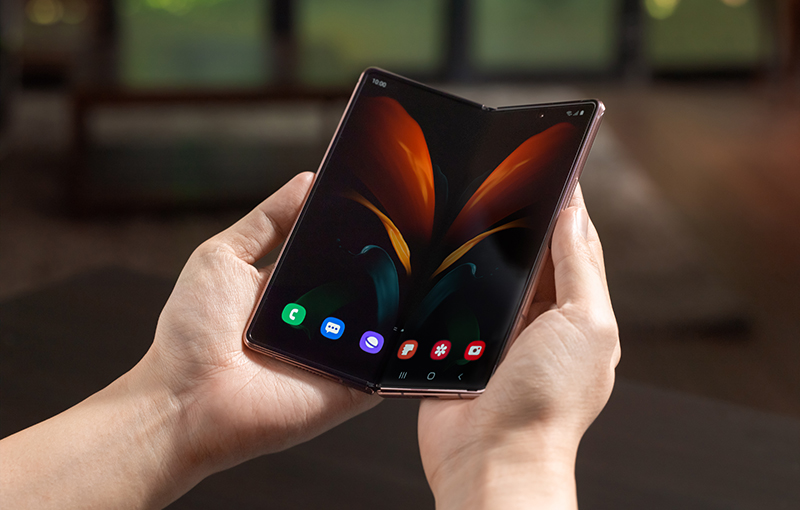 Samsung's ready to announce the availability of the Samsung Galaxy Z Fold2, and they've revealed even more details about the luxury flagship smartphone ever since its last official appearance.

Previously, the Samsung Galaxy Z Fold2 was teased during the August 2020 Unpacked online conference (that launch was more for the Samsung Galaxy Note20 series and the Galaxy Tab S7 series products). The teaser revealed nearly all the core specifications about the Galaxy Z Fold2. Detailed included its larger display (compared to its predecessor), slimmer body, improved hinge, the usage of the same glass material found on the Galaxy Z Flip, and supporting of Flex Mode (halfway-open device).

Additional details shared at a subsequent conference for the Galaxy Z Fold2 revealed that the 7.6-inch Main Screen panel is a QXGA+ (2,208 x 1,768 pixels resolution) Dynamic AMOLED 2X Infinity Flex display. Adding to that is 27% slimmer bezels, which grants the panel more viewing real estate than before. As mentioned previously, the main, squarish display supports up to 120Hz refresh rate, along with the ability to adjust its refresh rate depending on the content displayed to help save battery power. 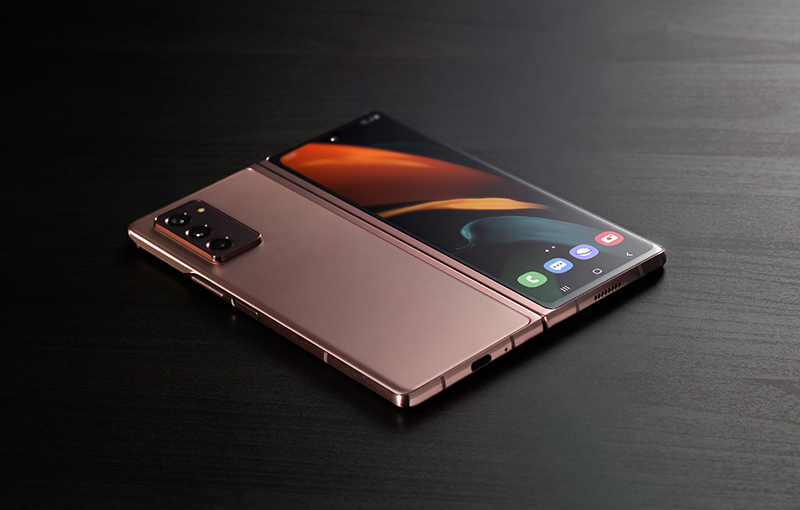 The front Cover Screen is a 6.2-inch Super AMOLED Infinity-O display at 2,260 x 816 pixels resolution with the subtle camera cut-out, which is also larger than the predecessor's 4.6-inch display.

When folded, the Galaxy Z Fold2 is 0.2mm slimmer than the previous fold at its thickest point, while the other end is a mere 13.8mm (down from the old 15.7mm). Despite these reductions in thickness, Samsung figured out a way to implant further enhanced vibration plates for the Galaxy Z Fold2's high-dynamic dual speakers. Samsung said in no conditional terms that the Galaxy Z Fold2 comes with the "best dynamic sound experience available among all Galaxy devices". 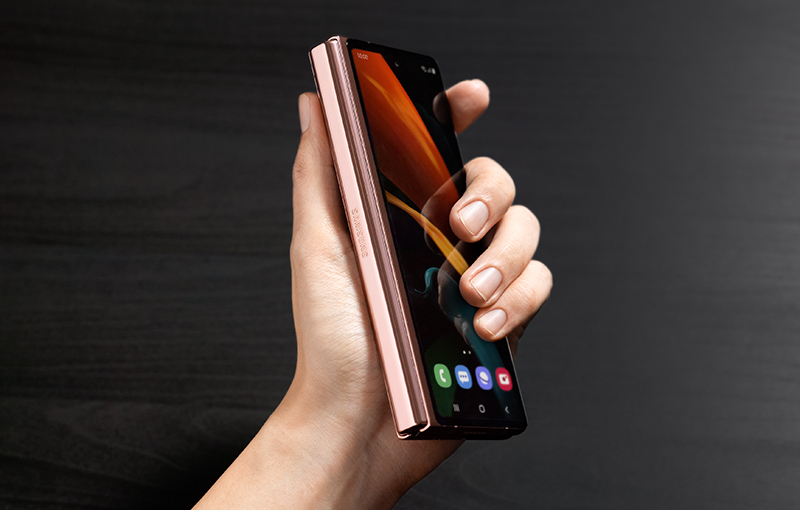 The hinges on the foldable smartphone are huge talking points, to which Samsung also revealed more about the technology and improvements behind them. Now, the Galaxy Z Fold2 can 'stand' upright when the other half is folded between 75- to 115-degrees, thanks to its improved mechanism inside the hidden hinge. The sweeper technology for keeping dust and dirt particles out also received improvements beyond their earlier sweeper designs, making the structure take up less space near the hinge.

App Continuity - watching the same video without skipping a beat when you fold or unfold the phone - returns to the Galaxy Z Fold2. Flex Mode - where you stand the device on a surface for recording or viewing purposes - works on both the Cover Screen and Main Screen. Currently, native apps from Samsung and some video apps are supported Flex Mode, with support for other apps unclear (until we try them out).

An example would be Capture View Mode, where the top half of the folded Main Screen acts as a camera viewfinder for selfies, while the bottom half shows the resultant snaps. Another cool Flex Mode feature is Auto Framing, where the phone will automatically pan to the subject during a solo video recording session.

For productivity matters, Samsung's unique tablet features, like App Pair and Multi-Active Window, are also available on the Galaxy Z Fold2. An additional feature that earlier devices do not have is Drag and Drop. Two compatible side-by-side apps can accept dragged text, documents, and images, such as dragging stuff inside Excel into your PowerPoint presentation or dragging a file from MyFiles to Outlook as an e-mail attachment. The screen layout is also customisable for users to choose between phone UI or tablet-like UI for supported apps too.

While we knew that the Samsung Galaxy Z Fold2 were coming in Mystic Bronze and Mystic Black, Samsung is also offering Hinge Customisation for further accented colourisation. Owners can go online and customise their Hideaway Hinge in Metallic Silver, Metallic Red, Metallic Blue, or Metallic Gold.

The Galaxy Z Fold2's pre-orders are starting in select markets, with the first street dates being 18 September 2020. Of the 21 markets that are getting Hinge Customisation, Singapore isn't one of the listed countries. The Thom Browne Edition of the Z Fold2 is officially available starting from 25 September 2020.

Join HWZ's Telegram channel here and catch all the latest tech news!
Our articles may contain affiliate links. If you buy through these links, we may earn a small commission.
Previous Story
Sennheiser's first mid-range true wireless earbuds launches at S$299
Next Story
The ZTE Axon 20 5G is the first phone with an under-display camera