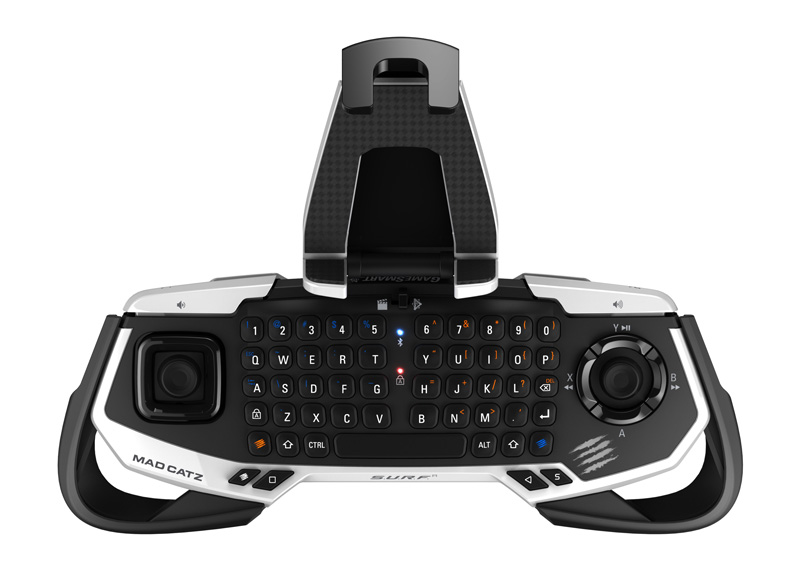 Mad Catz might not be a name known to the masses but they are one of the biggest manufacturers of third party gaming gear in the world. In recent years, the company has made waves among the hardcore fighting games community with their excellent premium fight sticks.

While the Mad Catz S.U.R.F.R. isn't as premium a controller as the fight sticks, one look at it will dispel any notion that this is a cheap gaming pad.

The Mad Catz S.U.R.F.R. is an Android gamepad designed for a couple of things in mind; surfing, messaging and gaming.

To that end, it not only has the dual analog sticks layout prevalent in modern controllers, but also a QWERTY keyboard in the middle of it when you need to type stuff. Whenever you need to do an on-screen selection, you can use the phone's touchscreen or if you prefer, move an on-screen cursor around, similar to how you navigate the internet browsers on consoles. There are even media shortcut buttons built around the right analog stick to enable easy playback and control of whatever media you have on your phone.

The special version of the Mad Catz S.U.R.F.R. that is set to launch for the Samsung Galaxy S7 and S7 Edge will have all of the bells and whistles of the original version, as well as unspecified exclusive features and functionality only for Samsung devices.

This is all part of Mad Catz drive to be the first company to deliver gaming controllers under the Designed for Samsung label, a special brand that highlight accessories that are compatible with Samsung products.

The Mad Catz S.U.R.F.R. for the Samsung Galaxy S7 and S7 Edge still doesn't have a release date or price but if Mad Catz prices it similarly to the older model, expect it to be around US$80.

Join HWZ's Telegram channel here and catch all the latest tech news!
Our articles may contain affiliate links. If you buy through these links, we may earn a small commission.
Previous Story
MasterCard wants to replace passwords with selfies
Next Story
Microsoft buys cross-platform mobile development tool vendor Xamarin