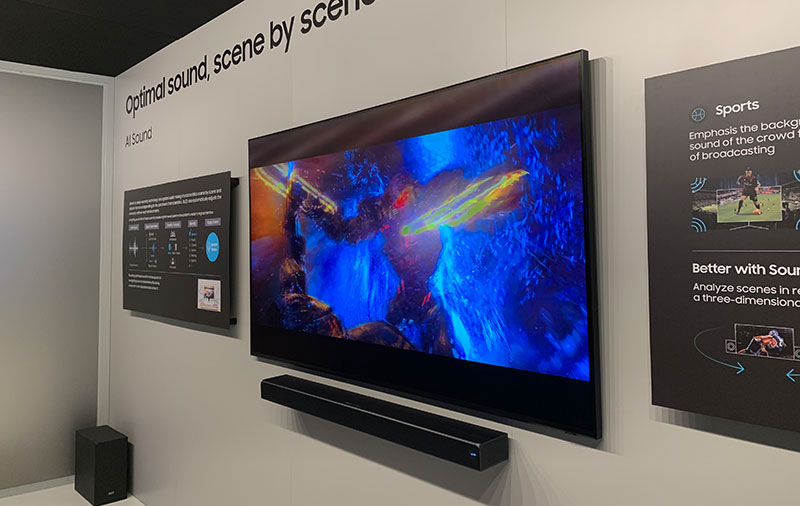 Note: First published on Jan 7, this article was updated on Mar 25 to include local pricing and availability info.

In addition to AirPlay 2 support and an iTunes Movies and TV Shows Apple TV app, we now have more details on some of the other new features coming to Samsung’s 2019 QLED TVs.

Like LG, Samsung’s latest 4K QLED TVs have a new processor and it’s getting a name: Quantum Processor 4K. The name isn’t a surprise really, since Samsung has already announced a Quantum Processor 8K for its Q900R QLED 8K TV at IFA last August.

Like the Quantum Processor 8K that uses machine learning to upscale any content to 8K-like quality, the Quantum processor for the new QLED 4K TVs also uses AI for better 4K upscaling quality. Versus last year, the latest QLED TVs offer much wider viewing angles, which I understand to be the result of an improved Ultra Black Elite anti-reflection coating and additional filters that help to gather and spread light more evenly across the panel. The narrow viewing angle is my chief issue with Samsung’s 2018 Q9F, so I’m glad the company has taken steps to address it.

Once again, you can expect Samsung’s 2019 QLED TVs to support HDR10+ and have 100% color volume. My understanding is that AI is also used for adjusting brightness.

The new Quantum processor also enables what Samsung calls “AI sound”. In broad strokes, the TV will analyze each content scene and the space where the TV is placed to dynamically adjust the audio. For movies, it’ll seek to highlight the surround effects; for news, the focus will be on voice clarity; and for sports, it’ll emphasis the background and the sound from the crowd to increase realism. Samsung claims this feature will work even better if you’ve a soundbar with speakers that offer more directionality.

Samsung's QLED TVs last year were able to automatically detect game consoles, such as Xbox, PlayStation, and Steam, and turn on Game mode. This year, the TVs are able to detect the Nintendo Switch, too. Input lag has also been reduced to 15.4ms; and there's a dynamic black equalizer that increases the visibility of dark scenes (so you can see the enemy hiding in the corner) without sacrificing color accuracy and over-exposing the bright areas.

One big change this year is Samsung's consolidation of all its AI efforts under the Bixby brand. The new QLED TVs come with a new version of Bixby for voice commands using the smart remote. Compared to version 1, Samsung says Bixby 2.0 is more responsive and more conversational.

But unlike before, there's now no need to press any button on the remote to interact with Bixby 2.0. And that's because it has built-in far-field microphone that's always waiting for the "Hi, Bixby" hotword. Judging from the demo, the remote can be meters away from the user and the mic will still be able to pick up the commands. I was told you can turn this feature off if you don't want to use it.

Speaking of voice assistants, the new QLED TVs also support Amazon Alexa and Google Assistant (hi, LG). In a nut, this means you can control the TV with voice through an Alexa or Google Assistant smart speaker. For now, this integration is only for the 2019 models, but Samsung did say it might come to the 2018 lineup via a future firmware update.

The 2018 QLED TVs have an Ambient mode that lets you put other content (e.g., your own photos, an interactive background) on the screen when the TV is turned off. This feature is vastly improved on the 2019 models, and now comes with 62 configs over 5 categories that you can choose from, up from last year's 12.

The Q90R is the flagship 4K QLED series this year. It comes in 82, 75, and 65-inch screen sizes, but Samsung Singapore is only carrying the 82-inch model here. This is a full-array local dimming model with the same number of LED zones as most of its 8K brethren. Ultra-wide viewing angles, 100% color volume, Bixby on TV, YouTube voice search, AirPlay 2, iTunes Movies and TV Shows app, as well as support for Samsung's One Invisible Connection and no-gap wall mount are some of the key features of this series.

The Q80R is also a FALD model though it has fewer dimming zones than the Q90R. Like the Q90R, it has the new ultra-wide viewing angle improvement that's also present on the 8K QLED TVs. 100% color volume, Bixby on TV, YouTube voice search, AirPlay 2, iTunes Movies and TV Shows app, One Invisible Connection, no-gap wall mount - all these are present on the Q80R.

The Q75R is also a FALD model, but it has fewer local dimming zones than the Q80R. It too has built-in Bixby, and supports YouTube voice search, AirPlay 2, and the iTunes Movies and TV Shows app. However, it doesn't have the improved viewing angle that's on the Q80R and above QLED TVs.

The Q60R is an edge LED dimming model, and comes in 82, 75, 65, 55, 49, and 43-inch screen sizes (note: Samsung isn't selling the 43-incher here). 100% color volume, Bixby on TV, YouTube voice search, AirPlay 2 and iTunes Movies and TV Shows app support are all available on this TV, though not the One Invisible Connection.

Samsung has today announced the local pricing for its 4K QLED TVs:

All these 4K QLED TVs will be in stores starting today, with the exception of the 55- and 75-inch Q80R, which are arriving end April.

Check out the TVs at Lazmall now.

Read next: Samsung adds four more screen sizes to its 8K QLED TV lineup, and they're all coming to Singapore

Join HWZ's Telegram channel here and catch all the latest tech news!
Our articles may contain affiliate links. If you buy through these links, we may earn a small commission.
Previous Story
Apple Music has more paid subscribers than Spotify in the U.S
Next Story
StarHub has streamlined its TV plans, offering no-contract options, free set-top box, multi-screen viewing and more!