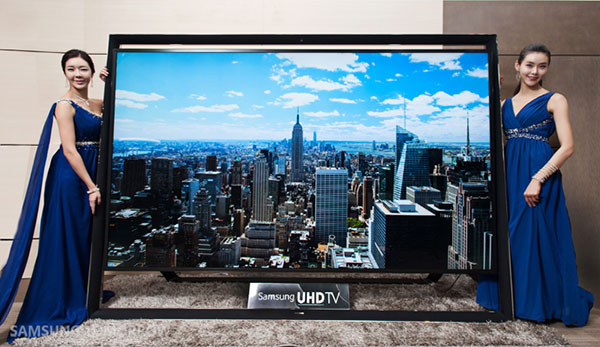 Remember that Samsung 110-inch UHDTV (a.k.a. 4K TV) that we saw being shown alongside its 85-inch sibling at CES 2013? Both from the S9 series, the latter has already gone on sale in Singapore since August 2013. And mere days before CES 2014 kicks off in Las Vegas, the Korean company has announced that the 110S9 is now hitting markets in China, the Middle East, and Europe. In fact, there are already 10 orders from the mega-rich (Samsung calls them ‘VVIP’ customers) in the Middle East. No pricing was revealed, but judging from the fact that the (ahem!) smaller 85-inch S9 is priced a dollar short of S$50,000, the very much larger 110S9 should cost considerably more. (Update: Los Angeles Times says it's US$152,000!) We hope to have more info come CES, as the company is bound to show off this bad boy alongside its 105-inch, 21:9 UHDTV.

And speaking of CES, Samsung has also announced that it’ll be showcasing its latest smart TV remote control at the trade show. Dubbed ‘2014 Samsung Smart Control’, it combines gesture-recognition with a new button console with four direction keys and a touchpad in the center to make navigating the smart TV UI and accessing content faster and more accurate. Needless to say, this 2014 Smart Control is also equipped with Samsung’s Voice Interaction functionality.

Samsung is also keen to stress the new remote’s 'elongated pebble-like oval' design, which it says results in a better grip. The company even went as far as to create an infographic to illustrate the history of its TV remote controls.

Join HWZ's Telegram channel here and catch all the latest tech news!
Our articles may contain affiliate links. If you buy through these links, we may earn a small commission.
Previous Story
Samsung to Launch Metallic Galaxy F Smartphone Along with Galaxy S5?
Next Story
Soundmatters to Expand Soundbar Line with DASHa & DASH7 at CES 2014