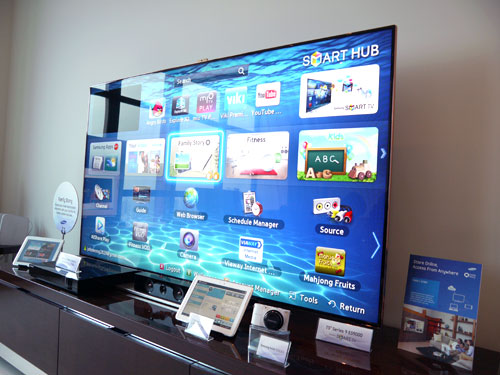 Samsung unveiled their new flagship ES9000 Smart TV earlier today, a sleek and polished 75-inch television illuminated by edge-LED backlights. Like the existing ES8000, the 3D-capable ES9000 will carry similar Smart Interactive features such as gesture and voice controls as well. The display's 75-inch profile also marks the company's plans to cater to rising demands for larger television sizes, such as displays measuring 60 inches and above.

The ES9000 sports a relatively slim depth despite its generous display estate, although no specific measurements were given by the South Korean firm for the TV's thickness at this point in time. Observably, the TV's unique rounded and rose-gold bezel also helps to differentiate the ES9000 from the rest of Samsung's LED models launched earlier this year. The web camera mounted at the top of the bezel can be retracted when not in use. Don't be misled into thinking that this is a 4K UHDTV model due to its huge footprint. The ES9000 is fitted with a humble Full-HD panel, equipped with Micro Dimming Ultimate (Samsung's answer to "local dimming" on an edge-lit set) and the relatively new Precision Black contrast-boosting technology. According to Samsung, it delivers "a 30 percent improvement in sharpness and black levels, and a 60 percent improvement in brightness levels over the Series 8 (ES8000) series".

The ES9000 is also equipped with Sound Share, a feature which enables users to transmit audio via Bluetooth to the TV set from compatible units like Samsung's DA-E750 and DA-E670 wireless audio systems. The TV's pedestal stand is visibly different from the ES8000 as well. The latter sports a U-shaped (or ArcFlow) stand, while the ES9000's base appears more conventional with its rectangular form factor.

Bundled with four pairs of active-shutter glasses, the 75-inch ES9000 is currently available at a recommended retail price of S$12,888.