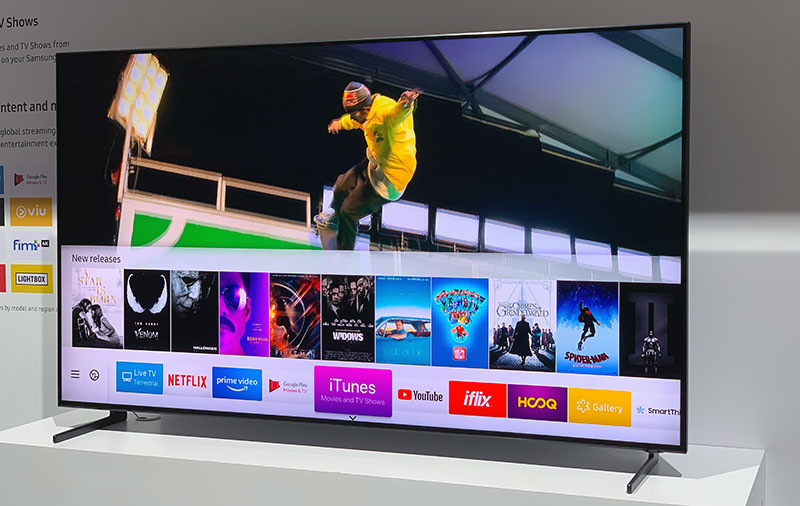 Samsung Singapore has today confirmed to us that the new Apple TV app and AirPlay 2 will be available on all 2019 Samsung smart TV sold here, as well as on selected 2018 4K UHD smart TV models. And come this fall when Apple launches its Apple TV+ original video subscription service, Samsung smart TV users will also be able to enjoy the service through this Apple TV app.

Over the years, Samsung has strived to provide our consumers with a wide selection of content on our Smart TV platform, including the most relevant and up-to-date local content such as CAST, Channel NewsAsia, Toggle and Viu apps. We are proud to be the first TV manufacturer to integrate the Apple TV app on a Smart TV platform, taking users’ experience to the next level and enhancing their home entertainment experience.

With the release of iOS and tvOS 12.3, Samsung has today announced that it's started to roll out a firmware update to select TVs to include the new Apple TV app and AirPlay 2 support. The company says the Apple TV app will come to its smart TVs in more than 100 countries while AirPlay 2 support will arrive in 176 countries.

According to this page on Apple's website, these are the Samsung TVs getting AirPlay 2:

At CES 2019 this past January, Samsung announced that its 2019 and 2018 8K and 4K QLED TVs are getting an “iTunes Movies and TV Shows app” sometime this year. Through this TV app you can access your existing iTunes library as well as buy or rent new movies and TV shows. The app will also integrate with Samsung’s smart TV services, such as Universal Guide, the new Bixby on TV, and search.

Fast forward to early this morning, and Apple has announced at its services-focused event a new Apple TV app. In addition to letting you access your iTunes movie and TV show purchases and rentals, you can use it to watch shows from popular streaming services, including Amazon Prime Video, Hulu, ESPN+, and more (but not Netflix). And in certain countries like the U.S., you can use the app to subscribe and access cable channels such as Showtime, CBS, and MTV. And of course, when the new Apple TV+ streaming service launches this fall, this is where subscribers access Apple original shows and movies.

With the latest iOS and tvOS software updates, the new Apple TV app is now on the iPhone, iPad, Apple TV 4K, and Apple TV HD. But Apple has also announced that the app is coming to popular streaming boxes and streaming sticks, such as Amazon’s Fire TV devices and Roku. Smart TVs from major brands are also getting the app, with the first being Samsung’s smart TVs this spring. I’m trying to get some clarity, but my understanding is that this revamped Apple TV app is the aforementioned iTunes Movies and TV Shows app. (Update, Apr 1: Samsung has confirmed to me that my understanding is correct.)

I also understand that this app will come as part of a TV firmware update as early as May. After Samsung, LG, Sony, and Vizio’s smart TVs are also expected to get the app, but no firm timeline is given for these other TVs.

Join HWZ's Telegram channel here and catch all the latest tech news!
Our articles may contain affiliate links. If you buy through these links, we may earn a small commission.
Previous Story
Samsung reportedly made two improvements to the Galaxy Fold
Next Story
Former Apple retail chief Angela Ahrendts joins Airbnb's board of directors