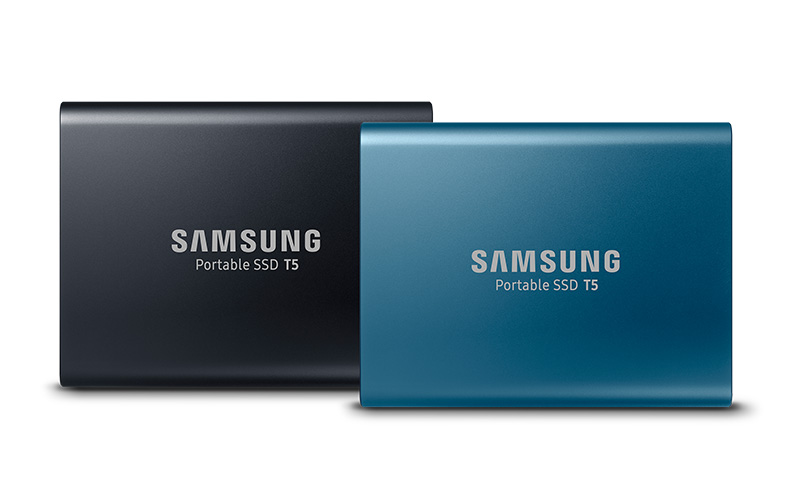 This makes the T5 faster than its predecessor, the T3, which had read/write speeds of up to 450MB/s. The T5 uses Samsung’s 64-layer V-NAND flash memory and a USB 3.1 Gen 2 interface to reach its rapid transfer speeds, which Samsung says is up to 4.9x faster than external HDDs.

The T5 ships with two cables, a USB Type-C to C and a Type-C to A cable, and the USB 3.1 Gen 2 spec is backward compatible. Unfortunately, there’s no support for Thunderbolt 3.

The T5 is solid both inside and out. SSDs have no moving parts and thus nothing that can be dislodged during a fall, and the T5 also has a shock-resistant internal frame which can handle drops from 2m. It ships with optional password protection with AES 256-bit hardware encryption to keep your data safe from prying eyes.

The Samsung T5 ships in two colors, blue (aptly name Alluring Blue) for 250GB and 500GB models, and black (Deep Black according to the literature) for 1TB and 2TB models. 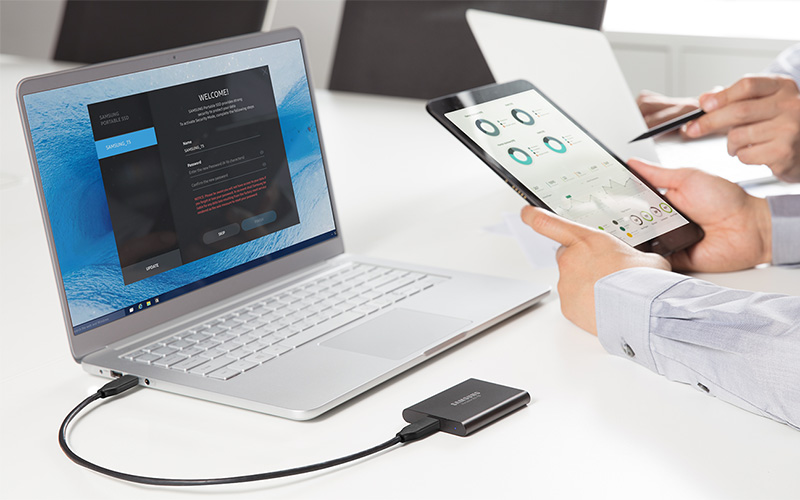 Special promotions for pre-order from now till 21 August

The T5 is available for pre-order from now until 21 August 2017 on Hachi.tech and Lazada Singapore. Samsung tells us that successful pre-order customers will be eligible to redeem the following complimentary gifts at Rewards2 at High Street Centre from 28 August to 8 September 2017:

The Samsung Portable SSD T5 will be available from 28 August 2017 at all major consumer electronics stores, Samsung Experience Stores and Lazada Singapore, at the following recommended retail prices:

Note: This article was first published on 16th August 2017.