Samsung Reveals a Host of New Smart Cameras at CES 2013

Samsung Reveals a Host of New Smart Cameras at CES 2013

Samsung has announced the launch of quite a few Smart cameras at CES 2013. These new cameras feature new functionalities and upgrades that make it easier for users to edit and share their images. One such feature includes Samsung’s new Smart Camera app, which allows users to connect with their Smart camera to share, backup and edit images via the smartphone app.

The WB850F is Samsung’s new flagship model in the WB series. The camera sports 18x optical zoom, a 14.2 megapixel CMOS sensor and 24mm lens. It also has a hybrid touch interface and five-way navigational keys for controls. The WB250F also has features to make shooting easier, such as Best Face, which automatically selects the best facial expressions from a burst shot to create group photos where everyone looks good. The WB250F is available in four colors; white, cobalt black, gun metal and red. The WB800F is Samsung’s new compact superzoom camera, with a 21x optical zoom and a 16.3 megapixel CMOS sensor. Similar to the WB250F, the WB800F has a hybrid touch interface and will be available in white, cobalt black and red. Releasing a new range that is even smaller than the usual compact camera, the WB30F is the first of this line. It has a slim body that is 17mm thick, but manages to fit in a 10x optical zoom, 24mm wide angle lens and has the capabilities of a standard WB model. The WB30F will be available in black, white, red, purple and pink. 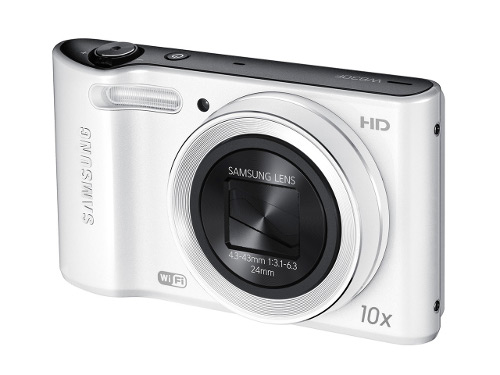 Samsung’s Dual View camera series sees a new addition in the form of the DV150F. The DV150F features Wi-Fi connectivity as well as a 1.48-inch Front LCD, which makes it easier to take self-portraits. The DV150F has a 16.2 Megapixel CCD sensor, F2.5 25mm lens and 5x optical zoom. It will be available in five different colors including plum, lime green and light pink. The ST150F rounds up the new releases announced during CES 2013 for Samsung’s new compact cameras. It has an F2.5 lens, 5x optical zoom and 25mm lens. It also has a 16.2 Megapixel CCD sensor and Wi-Fi connectivity, which allows for users to share photos and upload them to social media sites on the move as well. The TS150F will be available in four colors. Join HWZ's Telegram channel here and catch all the latest tech news!
Our articles may contain affiliate links. If you buy through these links, we may earn a small commission.
Previous Story
Unu Aims Big at CES 2013
Next Story
Panasonic's 2013 Smart Viera Plasma and LED/LCD HDTV Lineup Brings Enhanced Personalization