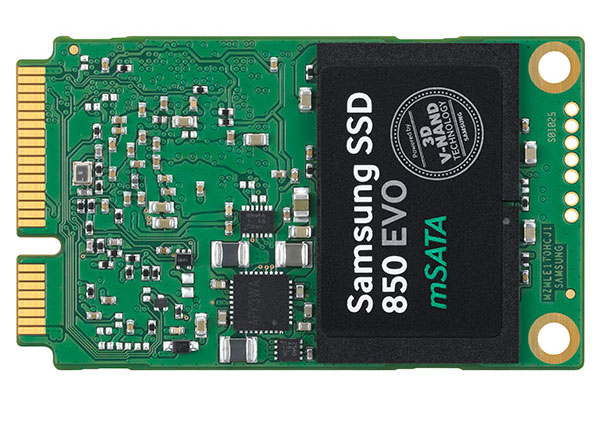 Samsung has launched the 850 EVO M.2 and 850 EVO mSATA SSDs, bringing a slimmer form factor to one of the best-performing consumer SSDs. Samsung was the first to commercialize the use of 3D NAND with its V-NAND in the enthusiast-level 850 Pro SSDs. It has since sought to bring 3D NAND to other market segments, releasing the more attractively priced 850 EVO late last year.

The Samsung 850 EVO mSATA replaces the older 840 EVO mSATA drive, but M.2 factor is new to the EVO line-up. Like the original 2.5-inch 850 EVO, the 850 EVO M.2 and 850 EVO mSATA will feature Samsung’s 32-layer 3D TLC V-NAND. TLC NAND allows for higher density memory, which helps to bring costs down.

Samsung is hoping that the new drives will find their way into ultra-thin laptops and PCs, and it’s easy to see how a HTPC or mini-ITX system builder would find the small space footprint of the new SSDs appealing. But even though they interface with mSATA and M.2 connectors, the new drives are still SATA 6Gbps-based SSDs and hence will post similar performance numbers.

The SSD storage space is heating up, and Samsung has released its new drives at a time when Intel, Micron, Toshiba and SanDisk have all announced new 3D NAND technologies that will further enable manufacturers to cram more storage into smaller devices.

The new drives will be available in the following capacities and price points:-

Both drives will ship with a five-year warranty.