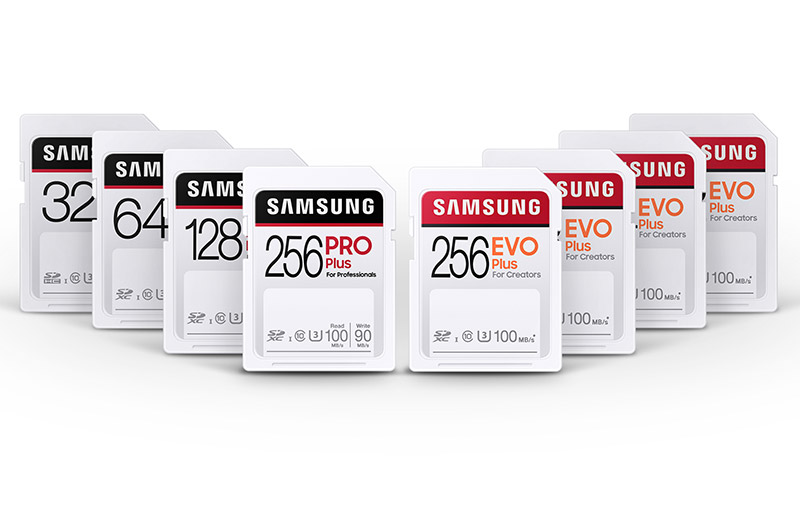 Samsung has just refreshed its SD card lineup with the brand-new Pro Plus series and an updated Evo Plus series.

Touting exceptional speeds and improved durability, the new SD cards are designed more for devices like DSLRs, mirrorless and compact cameras, camcorders and PCs instead of phones.

For instance, the U3 and Class 10 Pro Plus offers sequential read and write speeds of up to 100MB/s and 90MB/s respectively (60MB/s writes for the 32GB version), making it particularly suitable for content creators who do a lot of 4K recording or high megapixel burst shooting.

For the Evo Plus though, Samsung is less specific: the company only says the card has transfer speeds up to 100MB/s.

That said, both cards are constructed in the same way. According to Samsung, these cards are drop-proof (tested up to 5m) and wearout-proof (up to 10,000 swipes). They’re also impervious to water, X-rays and magnets.

The Samsung Pro Plus and Evo Plus SD cards will be available globally starting Oct. Both come in four capacities (256GB, 128GB, 64GB and 32GB) and a 10-year limited warranty. Local pricing isn’t available at the moment.

Join HWZ's Telegram channel here and catch all the latest tech news!
Our articles may contain affiliate links. If you buy through these links, we may earn a small commission.
Previous Story
The affordable Beats Flex wireless earphones offer up to 12 hours of battery life
Next Story
Apple offers three free months of Apple Arcade for new purchases from 22 Oct