Samsung Pay will officially launch in Singapore on 16 June

Note: This article was first published on 10th June and is last updated on 18th August.

What is Samsung Pay and how does it work? 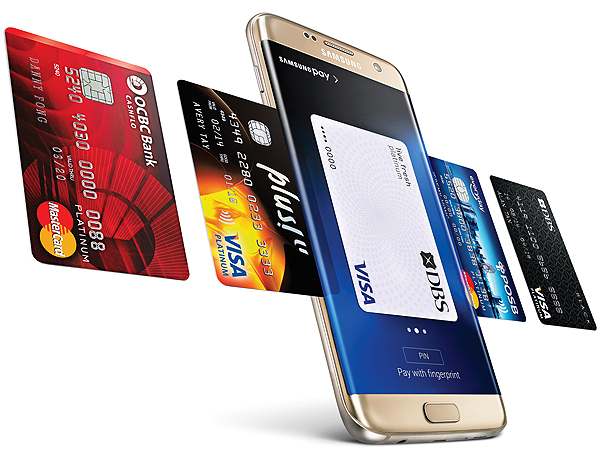 Samsung Pay works with the latest Samsung smartphones - they include the Samsung Galaxy Note 5 and S6 Edge+, Galaxy S7 and S7 Edge, and the new Galaxy Note 7. The payment method uses the phone’s NFC chip to interact with the merchant’s contactless terminal to start and complete the transaction, without the physical credit card coming into play.

The Samsung Pay process was designed with simplicity in mind. To start a transaction, the Samsung Pay user needs to bring up the Samsung Pay window by swiping up on the phone’s Home screen or a lock screen, before choosing their preferred card. The phone will prompt the user to enable the transaction via fingerprint recognition or a PIN. After that, simply tap the phone against the NFC or MST terminal to pay for your merchandise.

To share more and show us how it works, we had Thomas Ko, (VP, Global GM of Samsung Pay) and Chris Tarr (Regional Head of Contents & Services at Samsung Electronics) to tell us about the in and outs of Samsung Pay:-

Samsung Pay is also secure - your card information does not go to the merchant during payment, as it uses a separate, encrypted digital token for each individual transaction. The fingerprint and PIN used to authorize the payment are stored in a separate location on the Samsung smartphone. They are protected using Samsung’s proprietary KNOX security platform.

Which merchants and cards does Samsung Pay support?

Currently, Samsung Pay works with major payment networks such as American Express, MasterCard, and Visa. Supported banks include Citibank, DBS/POSB, OCBC Bank, Standard Chartered, and Maybank. This means that credit and debit cards from these banks and payment networks will work with Samsung Pay. Samsung is also looking to extend its smart payment method within the mobile payment space.

Samsung Pay works with many merchants and outlets. They include supermarkets, convenience stores, departmental stores, healthcare and beauty outlets, food and beverage outlets, fashion and lifestyle outlets, electronics and furnishing stores, as well as travel and entertainment merchants in general. Samsung Pay has a list of "preferred merchants", as seen below:

Singapore is the fifth country to adopt Samsung Pay. Previously, it was only available in South Korea, the U.S., China, and Spain. You can read more of our Samsung Pay coverage here.

If you own Samsung Pay compatible devices such as Samsung Galaxy Note 5, Galaxy S6 Edge+, Galaxy S7, Galaxy S7 Edge, and Note 7, you can get download the app here. And all it takes is 10 minutes to get it up and running.

Join HWZ's Telegram channel here and catch all the latest tech news!
Our articles may contain affiliate links. If you buy through these links, we may earn a small commission.
Previous Story
LG’s new Portable Speaker art series looks as great as it sounds
Next Story
The new OnePlus 3 is powered by a Snapdragon 820 processor and has 6GB of RAM