At CES 2019, Samsung has launched two laptops: the Notebook 9 Pro and Notebook Flash. The Samsung Notebook 9 Pro boasts of a full metal finish, thin bezels, and a customized LED indicator bar. It comes bundled an Active Pen “with more than 4,000 levels of pressure sensitivity”.

The 13.3-inch notebook lacks a discrete graphics chipset so graphics processing is handled by the onboard graphics of its 8th-gen Intel Core i7-8565U processor. It also comes equipped with 8GB RAM and up to 256GB PCIe SSD storage. Connectivity-wise, you get two Thunderbolt 3 ports, one USB-C port, and a microSD card slot.

The Notebook 9 Pro weighs 1.28kg and is relatively slim at slightly under 14mm in thickness. It also boasts of a 14-hour battery life on regular operations. 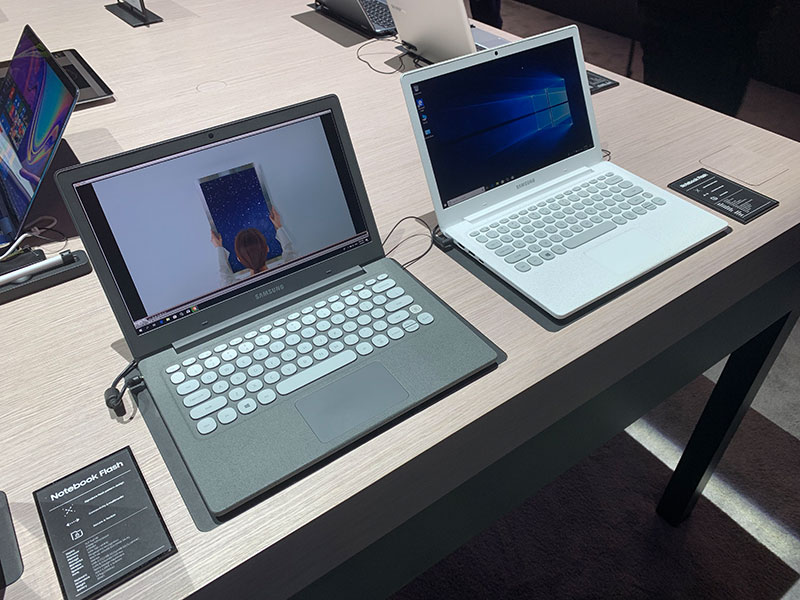 At a glance, the Samsung Notebook Flash is reminiscent of a netbook with is charcoal black color and a unique knitted fabric-like plastic finish. The 13.3-inch notebook sports a typewriter-style keyboard but despite this rather retro design, it also comes with a fingerprint scanner.

The choice of processor is either an Intel Pentium Silver N5000 or an Intel Celeron N4000, which are based on Intel’s Gemini Lake architecture, the successor to Apollo Lake chips. RAM and storage are pegged at 4GB and 64GB eMMC respectively. The built-in webcam is also less than HD.

The 1.38kg Notebook Flash does come with quite a number of ports, including two USB-C ports, one USB 3.0 port, one USB 2.0 port, one HDMI terminal, and a 3.5mm headphone jack. It also accepts microSD storage. Both notebooks operate Windows 10 Home and are expected to go on sale early 2019 in the U.S.

Join HWZ's Telegram channel here and catch all the latest tech news!
Our articles may contain affiliate links. If you buy through these links, we may earn a small commission.
Previous Story
Dell freshens the XPS 13 with new processors and minor design tweaks
Next Story
Lenovo updates its Yoga C730 convertible with a stunning 4K AMOLED display