Were you impressed with the imaging capabilities of the Samsung Galaxy S20 Ultra and Galaxy Note20 Ultra? Those flagship models used Samsung's sensors with 0.8μm pixel size to deliver its combination of high-quality imaging capabilities and customisations that help improve every shot. Today (15 September 2020), Samsung announced their next-generation 0.7μm pixel size sensors, one of which is a successor to the Galaxy S20 Ultra and Note20 Ultras' 108MP sensor.

In their official statement, Samsung said that the 0.7μm pixel size sensors are up to 15% smaller than the previous generation camera modules. The statement claimed that "a mere 0.1μm-difference per pixel can have a significant impact on the overall size of the sensor as well as the height of the camera module". These differences can allow more flexibility to phone makers in their product design.

Without further ado, they are: 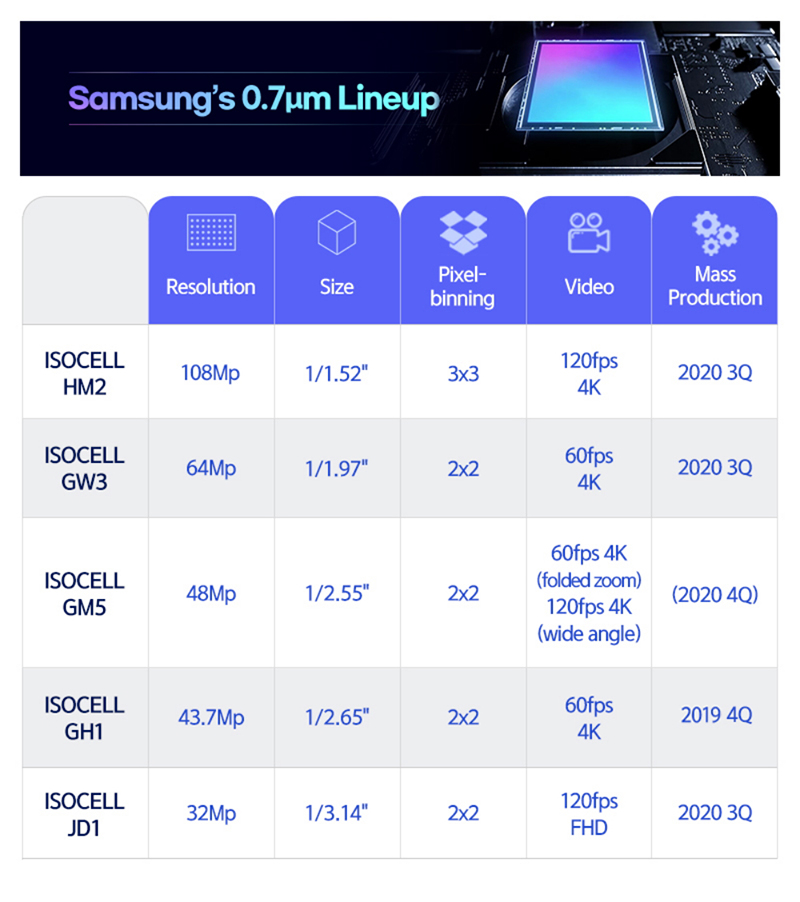 Samsung ISOCELL HM2: as shown in the chart, the 1/1.52-inch ISOCELL HM2 sensor is the follow-up to the 108MP sensors on the Galaxy S20 Ultra and Note20 Ultra. It retains its nona-binning technique (three-by-three pixel binning) to bring out lower noise and better low-light performance in the photos it takes. What's interesting is the 4K resolution @ 120fps video recording capabilities as well.

ISOCELL GW3, ISOCELL JD1: these sensors are 64MP and 32MP, respectively. The 64MP sensor's optical size is nearly identical to Samsung's older 48MP sensor with 0.8μm pixel size. On the other hand, the JD1 sensor is the industry's smallest 32MP sensor (or so Samsung claims), making it possible for bezel-less phones to adopt pin-hole or pop-up front-facing cameras due to its size. Both image sensors here come with staggered HDR shooting capabilities, which exposes the pixels to long, medium, and short readouts to the mobile processor for clearer and less noisy images.

According to Samsung, the HM2, GW3, and JD1 sensors are already entering mass production phase (Q3 2020), so phone makers can look forward to including them in next year's smartphone devices.

On top of three ready-to-go sensors, Samsung is currently sampling the ISOCELL GM5, a 48MP sensor with 0.7μm pixel size designed for telephoto or ultra-wide-angle use. It offers 5x optical zoom and staggered HDR, too.

Join HWZ's Telegram channel here and catch all the latest tech news!
Our articles may contain affiliate links. If you buy through these links, we may earn a small commission.
Previous Story
Grab is fined S$10,000 for fourth data breach
Next Story
This Star Wars: Squadrons CG short explores the Empire's side of the story