Note: This article was first published on 10th August 2016. 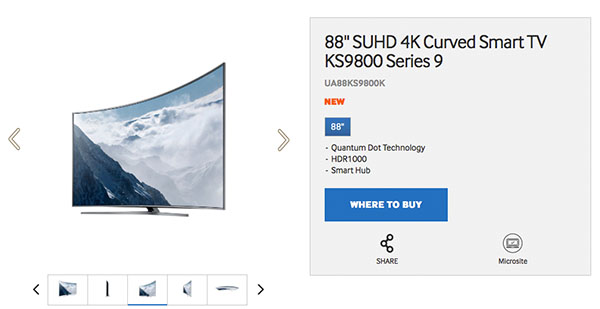 The Samsung KS9000 is a great 4K LED-LCD TV, but hardcore users are likely to shun it because it’s an edge-lit model, which has the LEDs located along the TV’s edge (bottom in the KS9000’s case). Such advanced users usually prefer their TVs to use a direct-lit LED backlight system that supports full-array local dimming, because the availability of the many dimming zones allow for better backlight control. In short, these direct-lit TVs usually offer better black level and HDR performances than their edge-lit counterparts.

In the U.K., Samsung has a KS9500 SUHD TV that offers full-array local dimming, but unfortunately, this series isn’t available in Singapore. What Samsung does have here is the KS9800, which as you can guess from the model number, sits above the edge-lit KS9000 in its 2016 SUHD TV lineup.

Like the other new SUHD TVs, the curved KS9800 is an Ultra HD Premium-certified 4K TV, sporting the company’s latest quantum dot tech, at least 1,000 nits peak brightness for HDR, and a revamped Smart Hub. More importantly, it’s the only 2016 SUHD TV sold here that has a direct-lit LED backlight system.

Expectedly, the KS9800 doesn’t come cheap. Available only in a humongous 88-inch screen size, the KS9800 is priced at S$26,999, putting it out of reach of most people other than the very rich. But if you can afford it and has the space in your living room for a TV that’s about 2 meters wide, the KS9800 is without doubt the best of the best SUHD TVs you can buy from Samsung today.

Join HWZ's Telegram channel here and catch all the latest tech news!
Our articles may contain affiliate links. If you buy through these links, we may earn a small commission.
Previous Story
YouTube reveals Singapore’s top-trending videos of 2016
Next Story
Aggressive design the cause of Galaxy Note7 battery explosions?