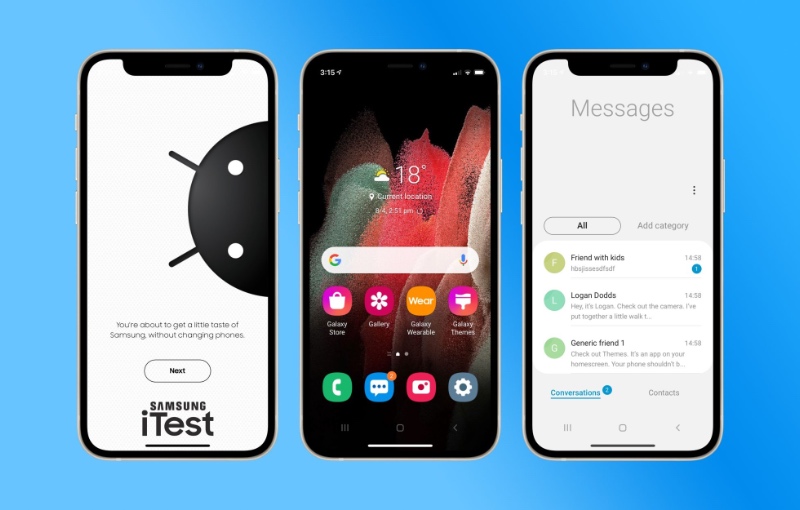 As the smartphone market becomes increasingly mature and saturated, brands realise that on top of retaining existing customers, they need to go on the offensive and win over new customers from rivals.

To do that, Samsung has launched a new website called iTest, which will enable iPhone users to "get a little test of Samsung."

You’re about to get a little taste of Samsung, without changing phones. We can’t replicate every function, but you should quickly see that there’s nothing daunting about switching to the other side.

When you visit iTest on your iPhone, you'll be prompted to add a web application to your phone's home screen.

Launching it will give you an Galaxy smartphone home screen complete with apps and settings. You can launch apps, change themes, browse the Galaxy Store, play around with the settings, and more. The app will even send simulated phone calls and messages. Generally, it's a good way to get a feel of what Android is like.

According to reports, this website is only being advertised in New Zealand at the moment. However, if it proves to be successful, don't be surprised to see Samsung marketing it a lot more aggressively.

Overall, the website is super slick and shows just how serious Samsung is at wanting to court iPhone users.

iPhone owners, if you want to get "a little taste of Samsung", head over to the iTest website here on your iPhone.

Source: MacRumors via 9to5 Mac

Join HWZ's Telegram channel here and catch all the latest tech news!
Our articles may contain affiliate links. If you buy through these links, we may earn a small commission.
Previous Story
New Brydge 10.2 MAX+ keyboard for iPads arrives in time to go back to the office
Next Story
Dummy units of new iPad Pros and iPad Mini 6 revealed