As early as last year, we reported that Samsung was working on a new NAND technology called 3D Vertical NAND (3D V-NAND).

3D V-NAND is type of NAND memory conceived to overcome the shortcomings of Triple-Level-Cell (TLC) NAND. We wrote about the shortcomings of TLC NAND in greater detail in our review of the Samsung SSD 840 EVO, but basically, it sacrifices endurance for greater memory density. 3D V-NAND overcomes this by stacking up to individual NAND cells on top of each other, as opposed to your conventional TLC and MLC NAND, which are planar in architecture. 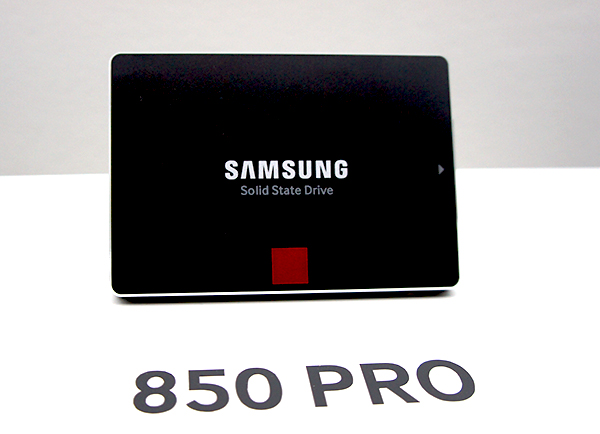 And just today at the Samsung SSD Global Summit in Seoul, South Korea, Samsung has just unveiled its new flagship high-end consumer SSD, which also happens to be the first SSD in the world to utilize this new 3D V-NAND technology - the SSD 850 PRO.

The SSD 850 PRO comes in a 2.5-inch form factor and uses the SATA 6Gbps interface. Under its hood is Samsung’s 3-core MEX controller, the same used in the SSD 840 EVO. The new SSD 850 PRO will also feature Dynamic Thermal Guard, a new feature that helps to prevent potential data loss from overheating. Additionally, the SSD 850 PRO will also support Samsung’s RAPID mode caching technology, which we have tested to dramatically boost performance.

According to Samsung, the SSD 850 PRO will provide maximum sequential read and write speeds of 550MB/s and 520MB/s; while random read and write performance will be in the region of a maximum of 100,000 IOPS and 90,000 IOPS respectively. The biggest performance boost, Samsung says, will be most evident in the 128GB model as it will outperform similar models in the market by more than 100MB/s when it comes to write speeds.

The new SSD 850 PRO will be available in 128GB, 256GB, 512GB and 1TB capacities and will be available globally from this month onwards. Pricing information will be updated as soon as we have it, but warranty will be a whopping 10 years. We have also been informed that a M.2 variant is scheduled for launch later this year.