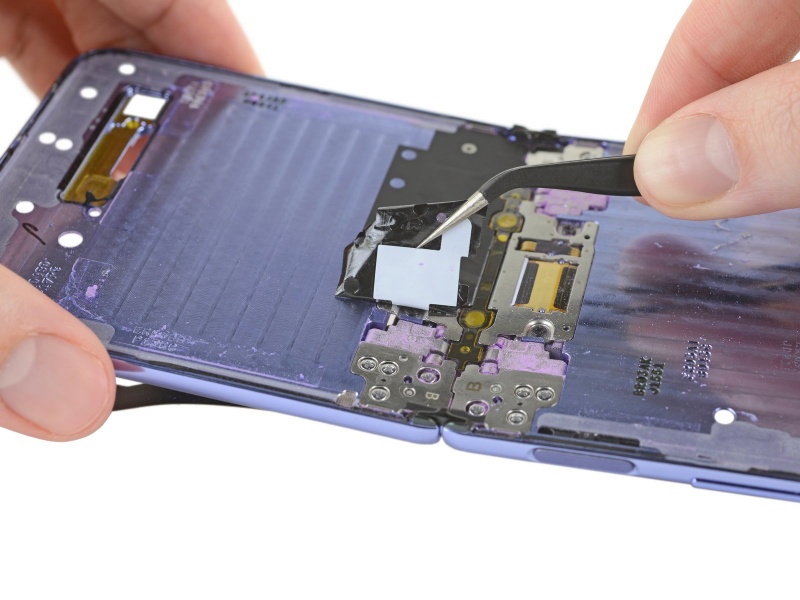 Like most other new phones, iFixit did a teardown of the recently announced Samsung Galaxy Z Flip and found a weakness in its design.

The hinge brushes of the Galaxy Z Flip, which Samsung claims to be a "fiber shield" to trap dust particles and prevent them from getting into the internals of the phone, may not be as effective as it is claimed to be.

iFixit dropped the Galaxy Z Flip into a bag of purple dust and took it out. While iFixit managed to shake a lot of dust out of the device, there was enough of the dust inside that it even stopped the hinge from opening up all the way! When the hinge was completely removed, it was found to be covered in purple dust and the brushes were surprisingly clean. This indicates that the brushes do not actually trap that much dust at all.

To be fair, Samsung did not market the Galaxy Z Flip as dust-resistant and normal day-to-day usage is unlikely to expose the device to the fine powder used in the test.

Overall, iFixit gave the Galaxy Z Flip a repairability score of 2 which is similar to the Galaxy Fold and one notch higher than the Motorola Razr. The glued-down glass panels, poorly routed cables and the lack of stretch-release adhesive are cited as reasons for its low repairability score.

Source: iFixit via The Verge

Previous Story
Hasbro is bringing back the 90s with these classic handheld LCD games
Next Story
Yakuza 0, Kingdom Hearts 3 and more are joining Xbox Game Pass in February