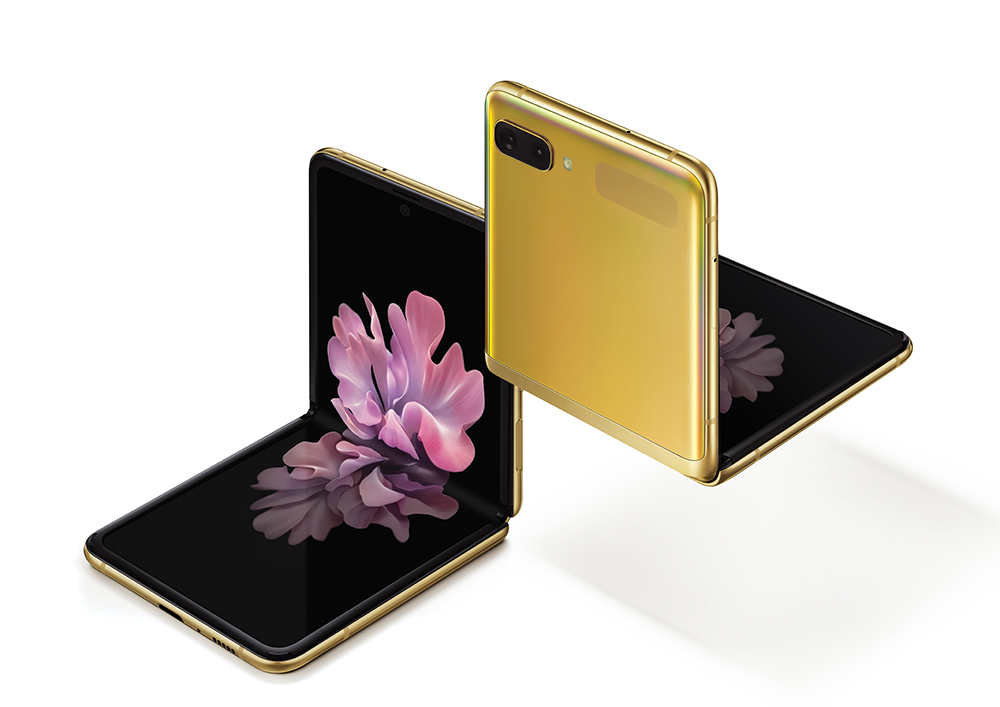 When the Samsung Galaxy Z Flip first launched earlier this year, it came in Mirror Black and Mirror Purple finishes. A third colour option, Mirror Gold, was also shown at the Unpacked event where Samsung revealed the folding screen phone. Available only in selected countries during the phone’s launch period, Mirror Gold is finally available for the Singapore market.

So, what inspired Samsung to use a gold shade for its most innovative smartphone to date? Beyond being a firm believer that there is still a demand for glittering, gold-clad smartphones, it has always prided itself on being an industry trend-setter as well. From introducing the large-screen smartphone design, to pioneering curved displays, breathing new life into the stylus through the S Pen, and more recently being the first mass-market foldable screen phone with the Galaxy Fold and even selling nearly half a million units is the perfect example of how Samsung constantly pushes the boundaries. The Galaxy Z Flip is the next in this new series of foldable display smartphones, now in a nostalgic clamshell form.

Thus, the Samsung Galaxy Z Flip in Mirror Gold, with its reflective mirror finish brings undeniable elegance to the Z Flip series - one that will fit perfectly with various demographics, be it the flamboyant crowd, the fashionistas, or simply those who want to stand out among their peers.

But what is a good-looking phone without the hardware to match? These phones are not just gorgeous on paper; they pack a professional-grade experience in the smallest, most powerful package out there. Straight off the bat, the Galaxy Z Flip’s impressive 6.7-inch Infinity Flex Display, which is flanked by an immersive Dynamic AMOLED screen underneath, can deliver incredible colour quality while simultaneously reducing harmful blue light emissions. And when this potent duo is coupled with a powerful Snapdragon 855 Plus processor, 8GB RAM, and 256GB storage, it ensures users get nothing but a silky-smooth experience. 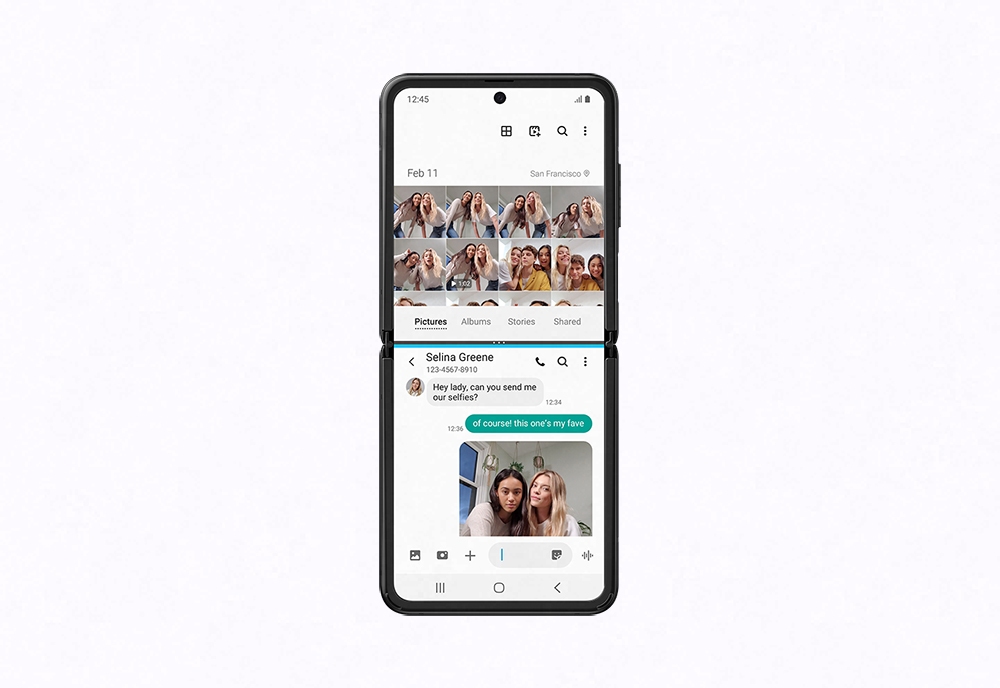 Complementing the above are fast network features such as Wi-Fi 5 (supporting 2.4GHz and 5GHz bands) and Bluetooth 5.0. This allows the Galaxy Z Flip smartphones to deal with various high-in-demand connectivity options with high-speed throughput, such as watching Netflix or playing the latest online mobile games. To keep its users well entertained, the Galaxy Z Flip’s slim body packs a 3,300mAh battery that boasts 13 hours of web browsing or 35 hours of talk time when fully charged.

However, the highlight of the Galaxy Z Flip is without a doubt the lotus blossom-inspired Hideaway Hinge that is precisely articulated for a satisfying folding motion — allowing you to adjust the precise angle of use with ease. What is more, the proprietary sweeper technology repels dirt and dust with every single fold.

Change the way you #selfie 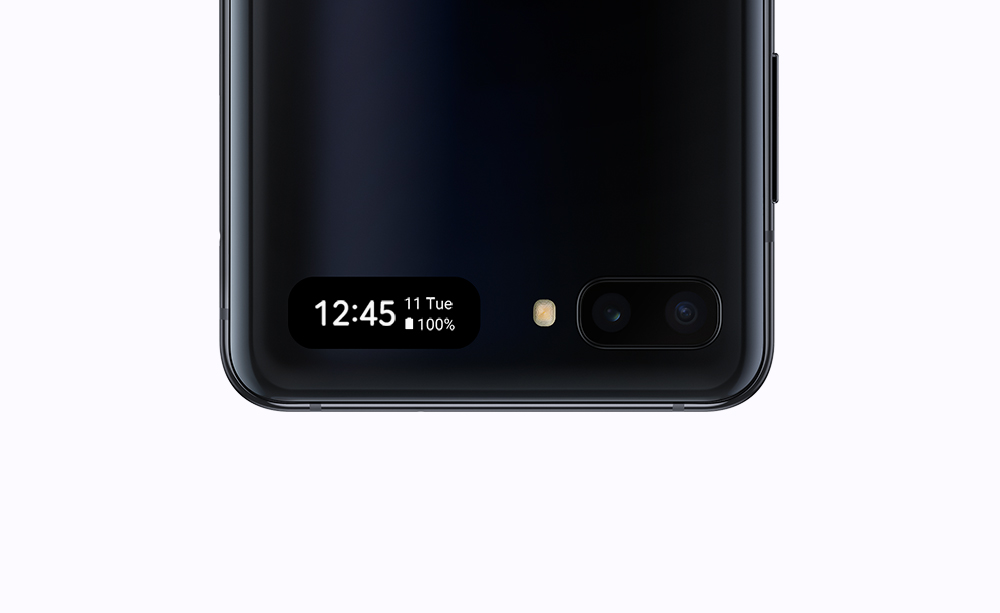 As for cameras, the Samsung Galaxy Z Flip is loaded with a 12MP dual-lens system with both wide and ultra-wide configurations. Selfie-addicts should zoom in on the Cover screen that will allow you to frame picture-perfect selfies with either of the primary cameras to give you some of the best looking selfie and wefie shots from phones today.

This thumbnail-sized Super AMOLED panel can even be used as a mirror when taking selfies. When the Galaxy Z Flip is closed, the power button can be double tapped to activate the exterior camera, which will bring up a cropped preview on the 1.1-inch pill-shaped Cover screen. When you’re ready to take the shot, hand gesture-based camera shutter activation comes in handy to take a snap without pressing buttons that may contribute to camera shake. Check out more of our photo-taking experience in our detailed review.

Hands-free has a new meaning

The Galaxy Z Flip’s bendy design, thanks to the above-mentioned flexible hinge and Infinity Flex Glass display, has both practical and functional uses. When the phone is partially folded, it will activate Flex Mode, which allows supported apps to reorient to fit the screen, letting you send messages or browse the web without holding it and making use of its form factor.

In fact, placing the half-folded phone on a flat surface is a great way to take clear, low-light shots, not to mention it lets you keep your hands free while you catch up with your loved ones over a video call. Thanks to a punch-hole 10MP selfie camera that sits at the top of the display, it is especially useful during the current circuit breaker since its position combined with its laid flat half-folded form factor makes it ideal for video calls with your relatives and online work conferences alike. After all, staying home remains everyone’s safest option right now - gallivanting about will not make the circuit breaker restrictions lift any faster. 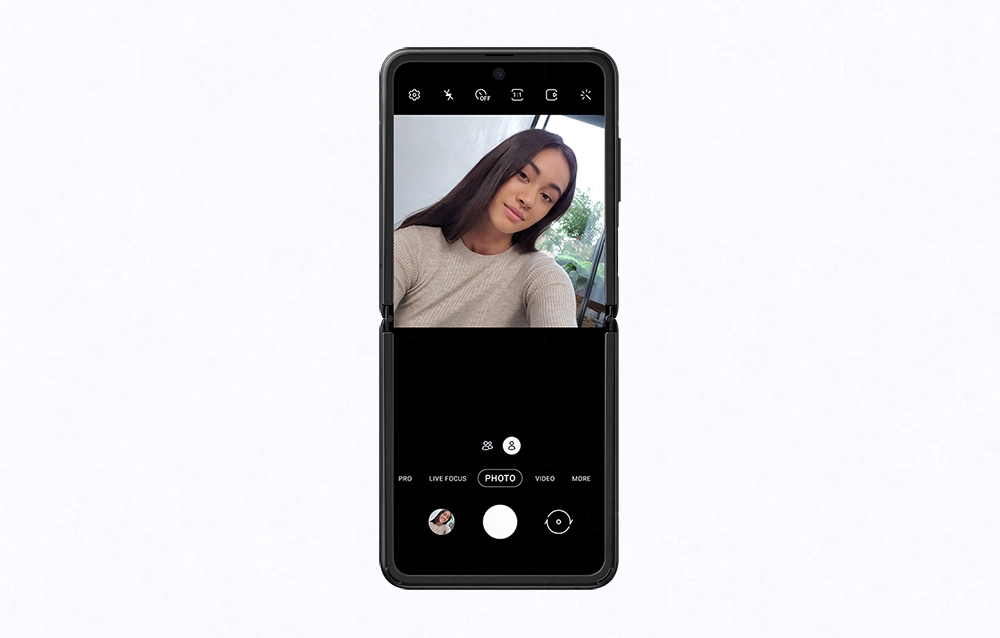 Having already collaborated on foldable versions of Maps and the Play Store, Samsung and Google are teaming up once again to bring similar functionality to YouTube's Android app. When viewed on a partially folded Galaxy Z Flip, the YouTube app will now split in two, with the top half of the display becoming a dedicated video player, allowing you to simultaneously read comments and search for other videos on the bottom half.

But there’s more. In order to streamline Flex mode support to other third-party services and apps in future, the YouTube app was also redesigned from the operating system-level by Google, a feat that involved the integration of the Android Support Library. 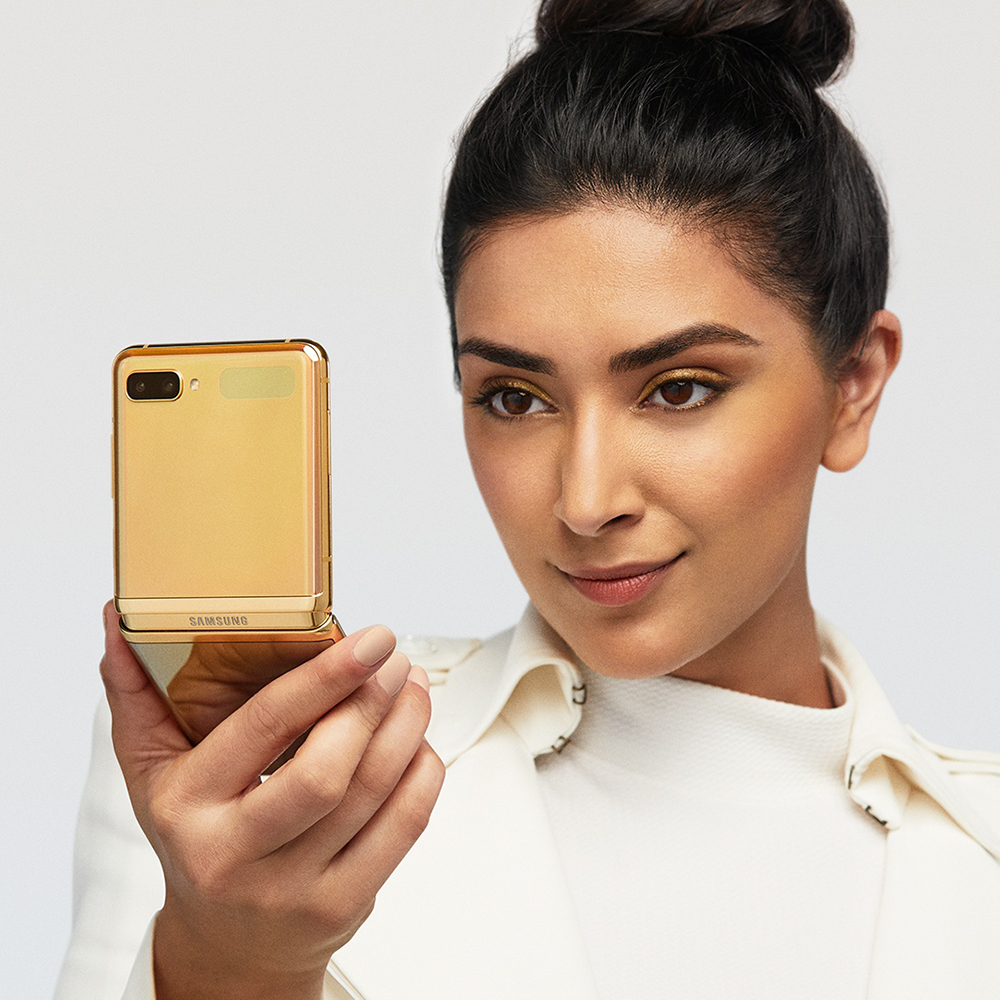 Indeed, it’s all about thinking ahead for the future, an ideal that Samsung has strived to embody from the start. Sporting a brilliant appearance and an even more dazzling list of features, the new Mirror Gold variant of the Samsung Galaxy Z Flip foldable smartphone is not to be trifled with. Priced at S$1,998 (including GST), this dynamic gem awaits you at all Samsung flagship stores, merchant retailers and selected telco partners.

For more information including specifications, head on to https://www.samsung.com/sg/smartphones/galaxy-z-flip/.

You can also read about what the Samsung Galaxy Z Flip is like after 100 days of personal use and the exclusive Thom Browne Edition Galaxy Z Flip.

Our articles may contain affiliate links. If you buy through these links, we may earn a small commission.
Previous Story
Huawei speaks up about the differences between the 4G and 5G versions of the MatePad Pro (updated)
Next Story
iOS 14 said to bring built-in translator and Apple Pencil support to Safari