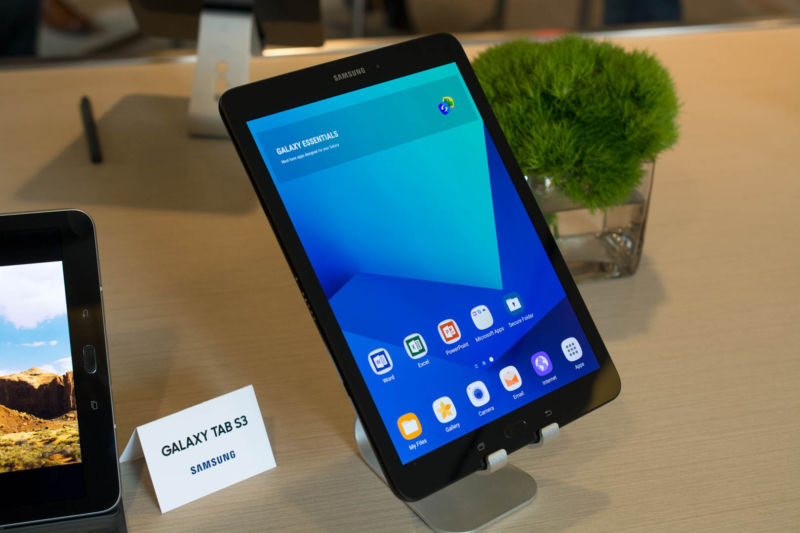 There was a time when Samsung was rolling out armfuls of tablets a year, but things have been considerably quieter for a while now. That said, Samsung has now announced the Galaxy Tab S3 at MWC 2017, the long-awaited successor to 2015’s Tab S2.

The company also announced the Galaxy Book 10 and 12, larger and more powerful Windows 10 devices for demanding users, but the Android 7.0-powered Tab S3 is probably the model with the most mainstream appeal.

It is fitted with a 9.7-inch 2,048 x 1,536-pixel Super AMOLED display, the same resolution as its predecessor, but the difference is that it is now HDR Ready and capable of producing a wider color gamut.

The speakers have been upgraded as well, and the Tab S3 boasts four AKG-tuned speakers for better sounds. Samsung says these can auto-calibrate depending on the orientation of the device, and the output will differ in portrait and landscape modes.

It has also received a decent performance boost in the form of a Snapdragon 820 processor, 4GB of RAM, and 32GB of storage, in addition to support for up to 256GB of expandable storage via a microSD card slot (the Tab S2 only supported up to 128GB).

Finally, both rear and front cameras have been improved to 13- and 5-megapixel shooters respectively.

The upgraded specifications aside, one major change is the Tab S3’s new focus on productivity. It will ship with a new version of the S Pen, which is larger and thicker than those included with Samsung’s older tablets. In comparison, the Tab S2 did not support a stylus of any sort.

The S Pen features a narrower 0.7mm tip, up to 4,096 levels of pressure sensitivity, and a tilt function that lets you draw with the sides of the tip, so those who fancy making digital works of art should be quite pleased. Unfortunately, there’s no dock on the tablet for you to store the pen, nor does it attach magnetically to the sides.

What it does have is an all-rubber construction and two flat sides, so it’s less likely to roll away from you.

The Tab S3 will work with an optional keyboard accessory, further adding to its productivity credentials. It attaches to the tablet at the bottom via pogo pins, so there’s no need for pairing or charging.

With a spec sheet like that, it’s clear that Samsung is positioning the Tab S3 as a competitor to the 9.7-inch iPad Pro and hopes to woo users who want to do more than just watch movies on their tablets.

Join HWZ's Telegram channel here and catch all the latest tech news!
Our articles may contain affiliate links. If you buy through these links, we may earn a small commission.
Previous Story
Cloudflare bug leaks sensitive user data throughout the internet
Next Story
Motorola launches Moto G5 Plus and G5 at MWC 2017, brings premium features to the mid-tier smartphone market