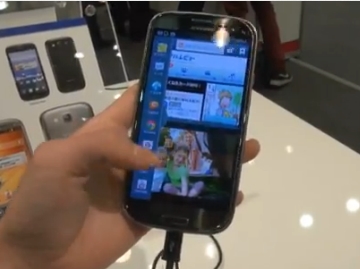 It was announced just a few days ago that Japanese company, NTT DoCoMo, will be offering both the Samsung Galaxy Note II and Galaxy S III Alpha to their subscribers. The latter, an updated version of the regular Galaxy S III, comes with a 1.6GHz quad-core Samsung Exynos 4412 processor and Android 4.1 Jelly Bean out of the box. This is similar to the Galaxy S III LTE version that was recently launched in Singapore, but with a 1.4GHz quad-core Exynos 4412 processor.

To add on, the Galaxy S III Alpha will come with the multi-window feature, one that was first shown on its bigger cousins, the Galaxy Note II and Galaxy Note 10.1. In fact, some units of the Note II were first shipped without the feature; thankfully, the problem has been rectified by a firmware update. Check out the video below:

As you can see, the smartphone ran smoothly and had no troubles switching between windows. Will this update be coming to the regular Galaxy S III and S III LTE devices? Here's hoping that the next software updates will allow S III users to play around with the multi-window function.

Join HWZ's Telegram channel here and catch all the latest tech news!
Our articles may contain affiliate links. If you buy through these links, we may earn a small commission.
Previous Story
Gaikai Sued by T5 Labs, Cloud-Gaming Industry Hit by Patent War Malaise?
Next Story
J5create's Android Mirror Launched