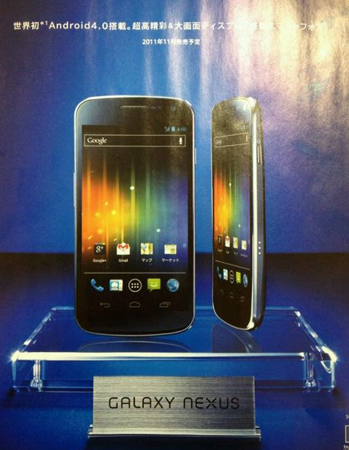 Just a word of caution: what you see might not be what you get... yet. Otherwise, the above photo looks pretty official and familiar to us (the remaining text has been obscured by the flash, but what we can make out on the left is, 'the world's first (smartphone) that supports Android 4.0'.), giving us a glimpse of what to expect of the Galaxy Nexus. Alongside the photo is a list of specifications that sound extremely similar to what has been leaked by BGR:

Do note that these aren't official yet but do offer us a rough gauge of what to expect tomorrow - but it confirms one previously unmentioned feature: NFC. Well, all we have to say is: stay tuned tomorrow for more updates.

*9:25am, 19th October 2011: Update: Android Community reconfirms the specs but made mention that the "LED lights" on the side are electrical contacts for slipping into docks. The smartphone will come in GSM HSPA+ versions as well as CDMA and LTE versions.*