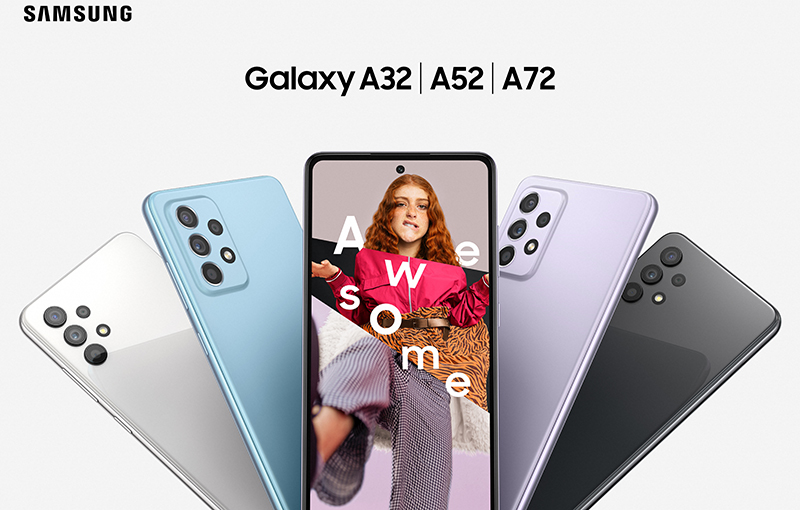 The majority of mainstream phone users want a handset that can last the longer part of the day, has decent camera performance, a nice enough display for most online content, and doesn't cost a bomb. Samsung has that in its mid-range Galaxy A series devices, and they've announced the new Galaxy A52, A52 5G, and A72 smartphones for 2021.

In a nutshell, the three phones hope to deliver a complete Samsung Galaxy ecosystem experience - from accessories to software - all within a reasonable price. Across the three models, the new Galaxy A series shares the Soft Haze finish, along with a nondescript camera housing that has the same colour as the rest of the phone. 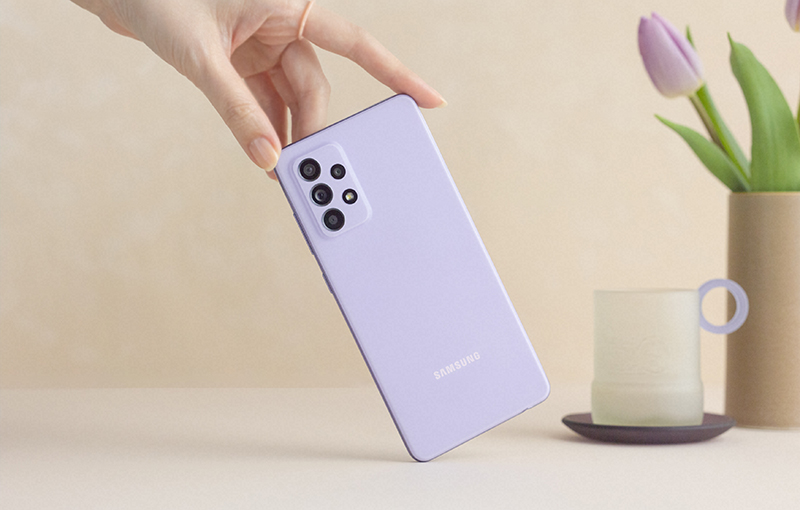 The phones also share similar rear quad camera configurations, with a main 64MP shooter that has OIS and autofocus, a 12MP ultra-wide lens, and a 5MP macro camera for close-ups. Both Galaxy A52 models will have a 5MP depth sensor for their fourth shooter, while the Galaxy A72 gets an 8MP telephoto camera with 3x optical zoom and OIS instead.

Some high-end photo-taking software features in its high-end Galaxy S smartphones will also be available in these mid-range handsets too. 4K Video Snap, which allows you to grab an 8MP still image from a 4K video, is one such tool. The AI-enhanced Scene Optimiser is also available, and that one automatically identifies up to 30 kinds of scenes to help improve photo-taking capabilities, such as colour, brightness, and sharpness. Video-taking enthusiasts can also use Pro Video mode for more granular control over their recordings.

On the display end of things, the A52 and A72 are getting a 90Hz refresh rate, while the A52 5G packs 120Hz instead. If you've been following phone announcements in general, you'd already know that the heighten refresh rates help to provide a smoother scrolling and video-watching experience (phones of the past were capped at 60Hz). Across all three models' displays are higher maximum brightness at 800-nits - the older A51 devices offered 600-nits while the older A71 went up to 700. Eye Comfort Shield, the blue light reduction technology that debuted on the Galaxy S21 devices are also coming to the mid-range A series too. 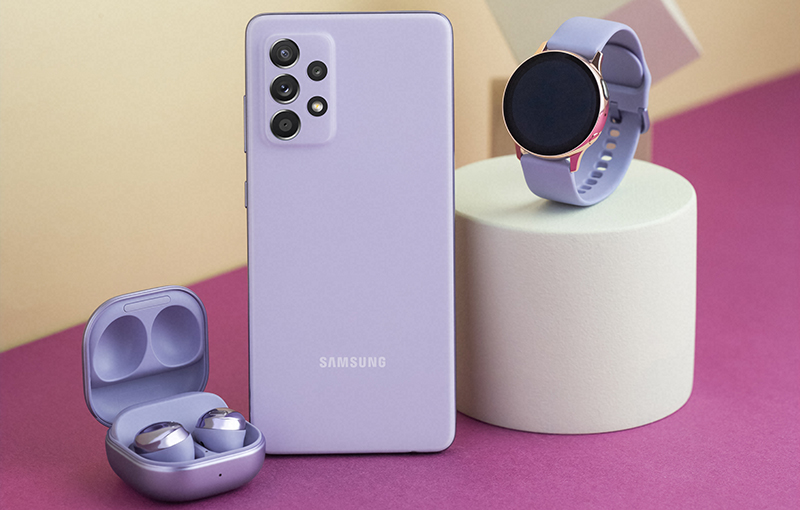 These new phones are also compatible with the many Galaxy add-ons like the Buds Pro earbuds, SmartTag item locator, and Samsung Knox security platform, so users who want to save on the handset don't have to feel left out of Samsung's other innovations and devices.

Finally, the A52, A52 5G, and A72 are all IP67-rated for water resistance and are guaranteed to receive up to four years of security updates (from the point of the phones' collective retail dates).

18 March 2021 3PM Update: We're happy to report that the Galaxy A52 5G coming to Singapore will come with an in-box charging adapter. According to the online event:

For many users, the Galaxy A series is their first Galaxy smartphone, and may not have the full ecosystem of Galaxy accessories at their fingertips. To ensure that users have the tools they need to take full advance of their new devices, we will include a charger plug and cable in the Galaxy A series packaging.

Samsung is working on the global transition of the removal of the charger plug and earphones from Galaxy smartphones. We believe that our gradual effort can help alleviate pressure that consumers may feel towards continually receiving new chargers and accessories every time they buy a new phone. It is important to note that we have used a standardised charging port (USB-C type) since 2017, making older chargers still compatible with our newest Galaxy devices. We encourage users to continue using existing Galaxy chargers, which are also available to purchase at an accessible price point," said Woncheol Chai, SVP & Head of Experience Planning Team, Mobile Communications Business, Samsung Electronics. 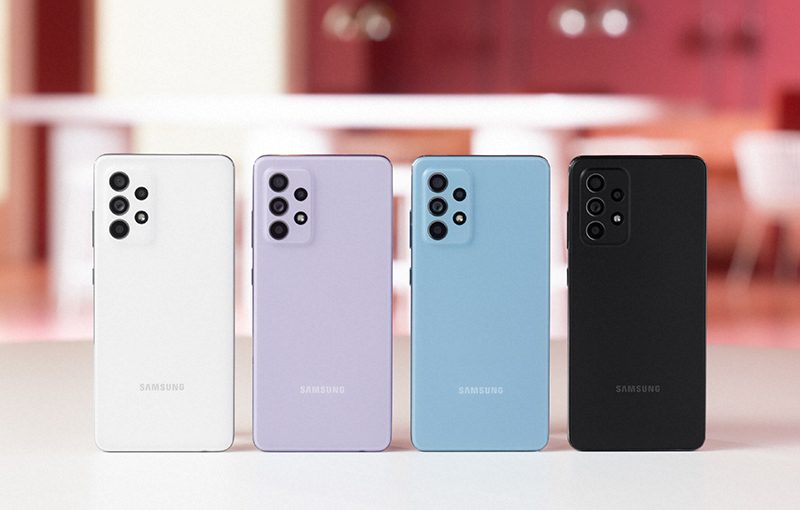 According to our local Samsung representatives, there are no immediate plans to bring the Samsung Galaxy A72 or A52 to Singapore. As such, we only have the official spec sheet for the Galaxy A52 5G, appended at the bottom.

Pre-orders are exclusively available via Lazada starting from tonight (17 March 2021, 10PM) until the launch of the phone. Each pre-order of the unit is entitled to a free Samsung Galaxy Buds+ (worth S$268) in Black, while stocks last.

From 27 March to 30 April, purchasing the Galaxy A52 5G will net a free Smart View cover in White (worth S$68), while stocks last. 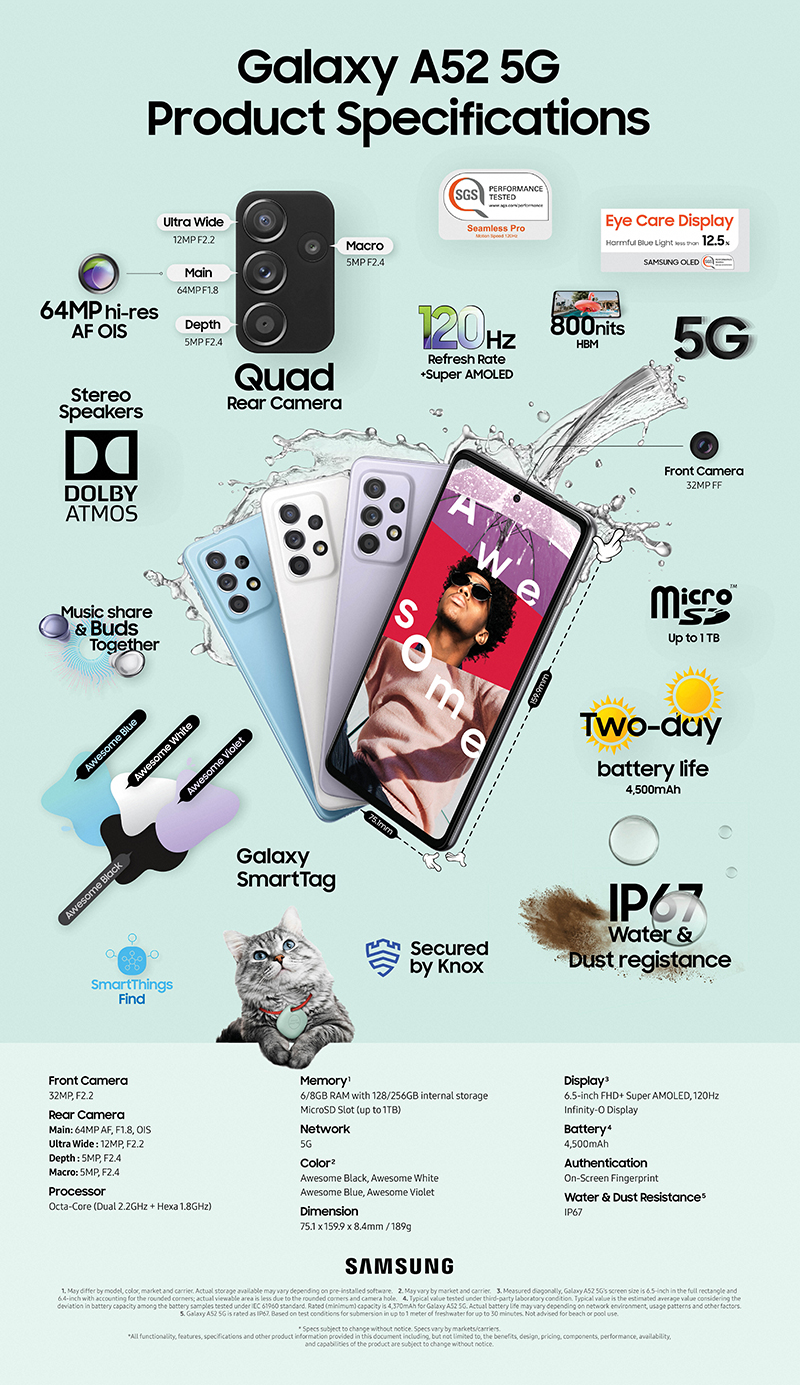 Also, Samsung is bringing the entry-level Galaxy A32 5G to our shores. This model will retail in the following configurations:

The phone officially hits the shelves on 2 April 2021.