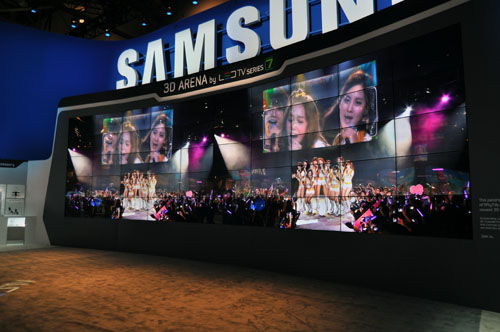 One inch is all it takes to surpass your competitors. Or is it? Following LG's and Sony's recent announcements of 84-inch Ultra High-Definition televisions over the past few months, Samsung is now set to one-up its rivals with an 85-inch UHD LED TV primed to make its debut at CES 2013.

According to Samsung's press release, the 4K screen is said to carry four times the resolution of Full-HD displays with over 8 million pixels; nothing new here, but what's more interesting is the display's so-called "innovative enhanced dimming technology" and "very high contrast ratio". We'll keep our eyes peeled for Samsung's touted abilities during our rounds in Vegas, and we'll let you know if they hold up.

Samsung will also reveal its 2013 Smart LED TV line-up for its 7500 and 8000 series during the trade show, as well as a Smart TV Camera with 1080p support. The camera will enable Samsung's Smart TVs without built-in cameras to be imbued with Smart Interaction features, such as Gesture Control and Face Recognition, when attached.

Join HWZ's Telegram channel here and catch all the latest tech news!
Our articles may contain affiliate links. If you buy through these links, we may earn a small commission.
Previous Story
Head of Microsoft's Windows Division, Steven Sinofsky, has Left Microsoft
Next Story
Google Maps Navigation (Beta) Launches in Singapore