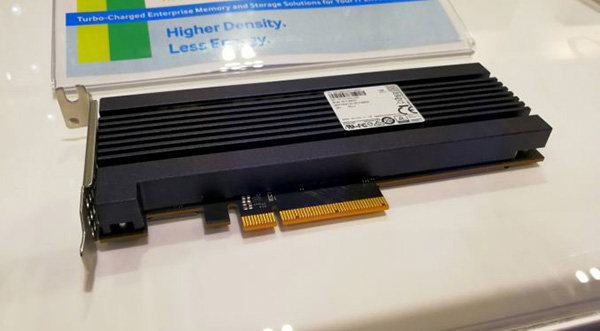 At the recent Cloud Expo Europe, Samsung showed off new drives equipped with its new Z-NAND.

Samsung first talked about Z-NAND last year at the Flash Memory Summit, and the first products are finally taking shape.

Samsung hasn’t released specifics about what Z-NAND is and how it works, but it did show off some numbers for its new Z-SSD.

It comes in a half-height PCIe 3.0 x4 add-in card and will offer 800GB of storage. Sequential read and write speeds are up to 3,200MB/s and random read and write performance is expected to be in the region of 750,000 and 160,000 IOPs respectively. It also said that latency will be around 70% lower than NVMe drives in the market today.

Much like Intel’s 3D XPoint memory, Samsung’s new Z-NAND is expected to slot in between DRAM and SSDs. However, it will face stiff competition as Intel released announced its new Optane SSD DC P4800X SSD, which is based on 3D XPoint and has some really promising performance figures.

No word yet on when Samsung’s Z-SSDs will go into sampling, but there’s a good chance Samsung will announce products around Z-SSDs later this year at its annual Global SSD Summit.

Join HWZ's Telegram channel here and catch all the latest tech news!
Our articles may contain affiliate links. If you buy through these links, we may earn a small commission.
Previous Story
The Corsair One is the company’s first pre-built gaming PC (Updated)
Next Story
Swipeable app allows you to share panoramas and 360-degree photos on Instagram