Samsung has announced that it has begun mass producing its first 4GB DRAM package based on the second-generation High Bandwidth Memory (HBM2) interface. You may recall that HBM is the new type of stacked memory utilized in AMD’s Fiji-based GPUs like the Radeon R9 Fury X, and HBM2 will similarly see use in high-performance computing, advanced graphics and network systems.

Samsung’s HBM2 memory is fabricated on Samsung’s 20nm process technology and reportedly has a performance ceiling that is seven times higher than current DRAM, which would help improve responsiveness for high-end computing tasks like parallel computing, graphics rendering and machine learning.

The 4GB HBM2 package comprises a buffer die at the bottom of a stack of four 8Gb core dies. The stacked dies are connected by vertical interconnects called through silicon vias (TSV) that offer a significant boost in data transfer performance compared to traditional wire-bond based packages. Samsung says that a single 8Gb HBM2 die contains over 5,000 TSV holes, more than 36 times that of an 8Gb TSV DDR4 die, which is what gives it its huge bandwidth advantage over typical wire-bond packages. 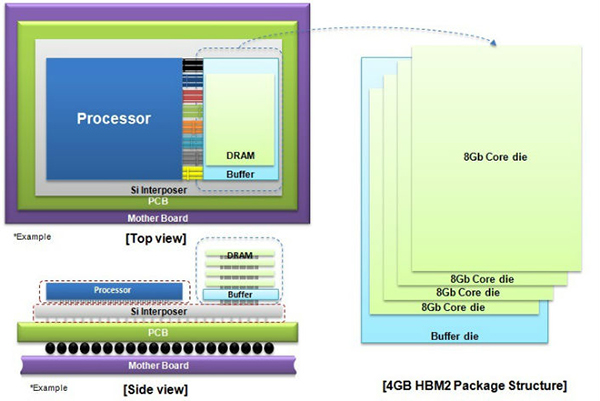 HBM2 also holds a large advantage over first-generation HBM, doubling the available bandwidth to an impressive 256GB/s. AMD cited bandwidth of over 100GB/s per stack for its first-generation HBM, so Samsung's figures certainly hold true. In comparison, a 4Gb GDDR5 DRAM chip – which currently has the fastest data speed per pin among existing chips – has a mere 36GB/s of bandwidth.

AMD’s implementation of HBM in its Fiji cards was fairly revolutionary because of the performance-per-watt improvements and space-savings, but NVIDIA is set to catch up soon, what with HBM2 going into mass production and the supposed inclusion of the stacked memory in its upcoming Pascal GPUs. The company said it would steadily ramp up production volume of HBM2 DRAM over the rest of the year to meet the anticipated growth in demand for network systems and servers.

Samsung also intends to produce an 8GB HBM2 DRAM package by this year. If implemented in graphics cards, manufacturers could enjoy space savings of more than 95% over GDDR5 DRAM, opening the door to even more compact graphics solutions in smaller and more powerful devices.